I see that the latest issue of Labour's Bulk Rose newsletter has quoted the Centros Miller ICM poll as stating that of those Lancaster residents aware of the proposals, 61% are in favour, 12% opposed, 14% don't know and 19% have no opinion.
Posted by John Freeman at 16:13 No comments:

Sun, sea, sand and cycling - the order of the day in Morecambe 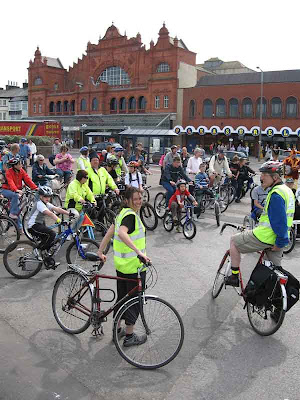 Sun, sea, sand and cycles were the order of the day in Morecambe yesterday (Sunday) when hundreds of people arrived by bike to join in the fun at the official launch of cycling on the town's promenade.

The event was organised by Lancaster City Council’s Cycle Demonstration Town (CDT) Project Team and Cultural Services to bring the community together to celebrate the change in the promenade byelaws which has enabled the five mile stretch of stunning views and fresh sea air to be opened up to cyclists.

Those there to mark the historic occasion enjoyed the variety of stalls and exhibitions on offer including cycle displays, an appearance by "Dr. Bike", Lancashire County Council’s cycling roadshow, street entertainment, and assault course, cycling information and plenty of freebies.

The highlight of the day was a historic mass cycle ride, when over a hundred cyclists, on bikes of all shapes and sizes, were officially sent on their way by Visitor editor, Glen Cooper, riding side by side along a section of Morecambe promenade and the Stone Jetty. Every one who took part received a cycling goodie .

As a Cycle Demonstration Town - one of just six in the country - Lancaster District has received Government funding to show how increased investment can raise levels of cycling in our district. The opening up of the promenade is seen as a major step forward towards the aims of the CDT project – to double the amount of cyclists in the district by 2008.

A year into the project and figures already show that cycling across the district is on the increase and Morecambe promenade is no exception now that cyclists are being encouraged to share its use, with an increase of 20% compared to the same time last year . After yesterday's fantastic cycling bonanza and so many new people experiencing the benefits, those figures are set to soar.

Lancaster City Council Director and Chair of the Cycle Demonstration Town Project Board, Peter Loker said: "It was wonderful to see the massive support for shared use of the promenade. We anticipate that this will encourage even more people to get on their bikes and make the most of the beautiful surroundings we are lucky to have in this district.

"I would like to take this opportunity to thank everyone who came along to this very successful launch event and all those who helped organise it".
Posted by John Freeman at 15:35 No comments: