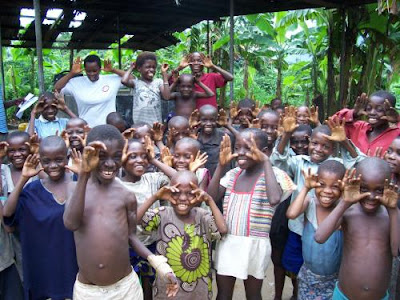 A locally-based organisation helping children in Africa is urging people to try to protect them from abuse and cruelty by signing an international petition for action to stop a monstrous modern day witch hunt.

The call from Thurnham-based Stepping Stones comes in response to the recent Observer newspaper article on the plight of the children that the organisation work with in Nigeria. An online petition has been set up to pressure the Governor of Akwa Ibom State, Godswill Akpabio, to act to stop the gross violations of child rights that are taking place due to the belief in child "witches".

The paper reported that evangelical pastors are helping to create a terrible new campaign of violence against young Nigerians. Children and babies branded as evil are being abused, abandoned and even murdered while the preachers make money out of the fear of their parents and their communities.

In one case, a 12-year-old, Ekemini Okon Samuel, was stigmatised as a witch and abandoned before the Child Rights and Rehabilitation Network (CRARN) in Eket Local Government Government area of Akwa Ibom State rescued her last month.

Channel TV News reported that the President of CRARN, Mr. Sam Itauma, has blamed the high rate of child trafficking in Akwa Ibom, South-South of Nigeria, on the activities of religious organisations who he says “label children as witches," noting that “more than 5,000 innocent children in the state had been wrongly labeled as witches by new generation Churches.”

"Countless children are being abandoned, tortured and killed in this region due to this traditional harmful belief," says Gary Foxcroft, Programme Director for Stepping Stones. "We need to act as quickly as possible if we are protect more children from harm and challenge this deeply held belief."

Once the pettion has as many signatories as possible Stepping Stones will then personally present the petition to the Governor. "This is just the first step in what is going to be a long, concerted effort by Stepping Stones Nigeria and our partner NGO - the Child Rights and Rehabilitation Network - to put an end to this needless suffering, Gary explains. "We will be looking to significantly expand the scope of our Prevent Abandonment of Children Today (PACT) campaign in 2008 and will keep supporters informed regarding any support they may be able to give us with this."

• The petition can be found at:
www.thepetitionsite.com/2/children-are-targets-of-nigerian-witch-hunt

• Latest news can be found at www.steppingstonesnigeria.org/latestnews
Posted by John Freeman at 12:36