Student Drama at the Dukes 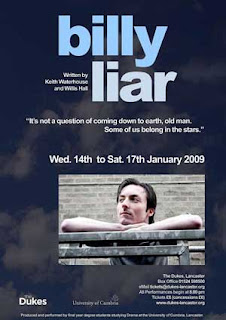 University of Cumbria third year Drama students will be producing and performing two popular family based comedies at The Dukes, Lancaster in January. Keith Waterhouse and Willis Hall's Billy Liar runs from 14 to 17 January and Laura Wade's Colder Than Here runs from 21 to 24 January.

Billy Liar tells the story of Billy Fisher, a bored undertakers' clerk in post-war Britain, who spends his spare time indulging in Walter Mitty like fantasies and dreams of life as a comedy writer in the 'big city'. However, with three girlfriends on the go, his flights of fancy come at a cost.

Based on the 1959 Keith Waterhouse novel, Billy Liar was first adapted for the stage by Waterhouse and Willis Hall in 1960. It was later made into a popular film, musical and TV series and the play has since been produced all over the world. 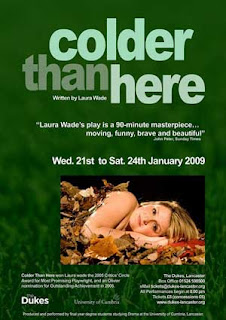 Colder Than Here, Laura Wade's beautifully poised family drama, was first produced at the Soho Theatre, London in 2005 and won Wade the Critics' Circle Award for Most Promising Playwright, and an Olivier nomination for Outstanding Achievement in 2006. As Myra researches burial spots and biodegradable coffins, her emotionally repressed husband and their two grown-up daughters are forced to communicate with her, and each other, as they face up to an unpredictable future.

Colder than Here is an astute and darkly humorous portrayal of a family pulling together in the face of impending grief and was described as a masterpiece by the Sunday Times. Laura Wade is currently adapting 'Colder Than Here' for television with Hat Trick Productions.

• All performances begin at 8pm and tickets are £8 full price/£6 concessions. To book tickets, contact the Dukes box office on 01524 598500 or email tickets@dukes-lancaster.org. For more information, visit their website at www.dukes-lancaster.org.