Vegan Feast at the Gregson

There's to be a Vegan Feast on Friday 7th November 2008 at 8.00pm upstairs at the Gregson in Lancaster.

The Feast is open to all vegans (and those who are interested in being vegan), and is a chance to get to know other vegans in Lancaster and area and to just share lovely food in a relaxed atmosphere (something that we vegans are good at!)

It's to be a jacob's join (aka pot luck), so bring a lovely dish or two to share with others. It could be a luscious main dish, or an amazing cake or a light fluffy dessert... If you're stuck for ideas then have a look at some of the following (or search for vegan recipes on the web):

The West End Gardens entered under the ‘Public Space’ category and unfortunately missed out on the winner’s trophy.

The winner was Cleveleys’ ‘New Wave’, a pedestrianised promenade and sea defence scheme.

Coun Evelyn Archer, cabinet member responsible for regeneration, said: "It is a great achievement to have been recognised as a finalist in these prestigious regional awards which have helped to raise the profile of the town.

"There was tough competition from other excellent schemes in the North West and we shouldn't feel too disappointed because the redevelopment of the West End Gardens is still a huge success."

Felicity Goodey, Chair of Tourism England’s Northwest said: “The Northwest Tourism Awards have set a very high benchmark for the industry over the past few years. All of the finalists are winners in their own areas, but perhaps more importantly they are setting the standards for others to follow.”
Posted by John Freeman at 20:02 No comments:

An American old time music and dance variety show full of humour and skill comes to The Platform in Morecambe on Friday November 7.

Appalachian Roots is a dynamic mix of traditional dance, song and instrumental music from the Southern Appalachian region of the United States, with a few international twists thrown in.

Ira Bernstein is regarded as one of the most versatile and accomplished performers of percussive step dancing in America and, in particular, as one of the foremost southern Appalachian flatfooters in the world.

His repertoire is a wide range of dances that all share a common thread – the production of rhythmic, percussive sounds.

The dances are more than movements accompanied by music, they are movements that make music – his feet are the sticks and the floor is his drum.

He has performed at many festivals and concerts all over the US and Canada and at 17 other countries around Europe, Asia and the Middle East and has appeared numerous times on television and in theatrical productions.

Riley Baugus first came to the British public’s attention when his singing was featured on the soundtrack to the recent Academy Award winning film ‘Cold Mountain’.

Those who have watched the DVD have seen the superb concert featuring the singers and musicians from the film with Riley upfront.

A native of North Carolina, he began playing music and singing at an early age and developed a love and appreciation for traditional Appalachian music.

Riley also plays with the Dirk Powell Band and Polecat Creek and has played with numerous other old time string bands. Collectively the pair have nearly 60 years of music and dance experience.

Animals at the Platform 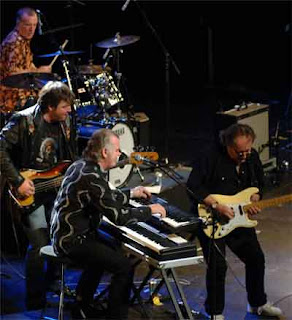 The Animals and Friends team up with legendary guitarist Spencer Davis to perform a concert packed with well loved hits from the sixties and seventies at The Platform, Morecambe on Saturday 8th November 2008.

Their formidable list of hits includes ‘Don’t Let Me Be Misunderstood’, ‘We Gotta Get Out of This Place’ and, of course, the multi million selling anthem ‘House of the Rising Sun’.

Spencer Davis, who created the famous Spencer Davis Group, had a number of Top Ten hit songs including ‘Gimme Some Lovin’, ‘Keep on Running’ and ‘I’m A Man’.

Expect to hear all of these and many more with a selection of The Animals hits in this wonderful evening of musical nostalgia.

This incredible collection of the cream of R & B talent is not to be missed, as this fantastic line up of music legends administer the perfect dose of 60s magic.

Regional Minister Beverly Hughes is to bring together key players from the public and private sectors to fight the North West's corner during the economic downturn.

The Joint Economic Commission for the North West, comprising members of the North West Development Agency, volunteer sector and trades unions, will meet frequently for the immediate future to ensure that the region acts as one in protecting families and businesses.

At this stage, there's no information on whether the Commission has a specific agenda that will target areas such as Morecambe or Lancaster specifically and try and deal with any recession-caused problems unique to our commuity.

"This is a global problem but it is increasingly being felt at neighbourhood level and by families," Beverly Hughes, also MP for Stretford & Urmston, commented. "As Regional Minister, I want to make sure that the key partners are doing all they can to ensure that the North West economy emerges from the current downturn stronger than before

"We will be looking at ways in which the public and private sectors can help individually and jointly. For instance, that might be looking at ways we can bring forward big infrastructure projects. Or it might be greater support for small businesses struggling to get access to finance in order to protect jobs"

"There has been tremendous enthusiasm for the idea and that in itself speaks volumes for the spirit of cooperation which exists among the key players in the North West."

The Commission, which will meet for the first time in early November, will bring together business leaders, local authorities, Government Office for the North West, the Northwest Regional Development Agency and public agencies like Jobcentre Plus, the Learning and Skills
Council, the Strategic Health Authority, the Highways Agency and the fledgling Homes and Communities Agency.

The Commission was announced as the Regional Minister met officials from the Treasury and the Department for Communities and Local Government and business leaders at a breakfast meeting in City Tower.

This looked at ways in which Government can support economic development in the region.

The Minister also sits on the Regional Economic Council in Westminster. This enables Regional Ministers to report back to the Chancellor and the Secretary of State for Business, Enterprise and
Regulatory Reform on the effects of the downturn in their regions.

The Regional Economic Council, which meets quarterly, brings together Regional Ministers, chairs of Regional Development Agencies and representatives of business and trades unions. It is chaired by the Chancellor and the Secretary of State for Business, Enterprise and Regulatory Reform. Its purpose is to ensure that the issues and concerns of each region are heard and acted upon. It supports the National Economic Council which coordinates economic activity across
Government.
Posted by John Freeman at 11:40 No comments:

An evening of terror in the Ashton Memorial

Join the staff of Williamson Park (if you dare!) for a terrifying evening full of shocks and scares, ghost stories and local scary tales on Friday 31st October with a performance of the play “The Ghost Writer.”

Staged inside the evocative main hall of the Ashton Memorial, the play, in which two characters meet up before a funeral to reminisce about an old friend, promises to be a petrifying evening full of shocks, surprises and scares. Perfect for Halloween!

The performance begins at 7.30pm on Friday October 31.

• For tickets or more information please call Williamson Park on 01524 33318, or email to office@williamsonpark.com. Due to the terrifying nature of the play, it is not suitable for under 14s.
Posted by John Freeman at 20:27 No comments:

Due to the weather forecast for Saturday 25th October, the Halloween Spooktacular event which was due to take place at Happy Mount Park has been cancelled.

This, combined with the amount of electrical equipment that was planned to be used, means the event has had to be cancelled for health and safety reasons.

The Council has apologised for any inconvenience this may have caused and any advanced tickets purchased can be fully refunded by telephoning 01524 582803.
Posted by John Freeman at 10:35 No comments: