Livewire - AC/DC Tribute at The Platform 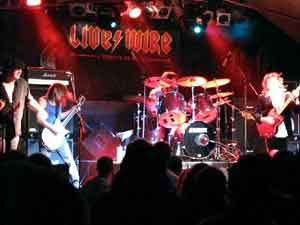 tribute band Livewire will be performing at the Platform on Friday, 21 November.

Livewire have established themselves as the hardest working AC/DC

show in the UK, as well as being unique due to having both the Bon Scott and Brian Johnson eras portrayed by two individual singers in the same two hour plus performance.

show to the fore, complete with the cannons, the Hells Bell, the walkways and the backdrops and drapes. Add a rock hard rhythm section and 'Angus Lorne' cutting the rug as Angus Young and its easy to see why this band has become so popular.

Expect to hear all the classics from 'Whole Lotta Rosie' and 'Highway to Hell' to 'Thunderstruck' and 'Back in Black'. There are no cutting corners with Livewire, it’s the full show – close your eyes, you hear AC/DC

A tribute to Franki Valli and the Four Seasons

by The East Coast Boys will take place at the Platform on Saturday 22nd November.

As the lead singer of the Four Seasons, Franki Valli

had a string of hits beginning with number one hit 'Sherry' in 1962. In 1975, Valli's song 'My Eyes Adored You' hit number one on Billboard's Hot 100 and he sang the theme song from Grease which was also a number one hit.

This full production show is one hundred per cent live and will feature many hits from both sides of the Atlantic including 'Sherry', 'Grease is the Word', 'Bye Bye Baby', 'Stay', 'Silence is Golden', 'Oh What A Night' plus many more.


Come along and enjoy this trip back in time with some fabulous music from the 60's and 70's.

The Drawer Boy is the story of Morgan (Ian Blower) and Angus (Mick Stroebel), World War 2 veterans who just manage to make a living on their farm, Morgan looking after Angus whose memory has virtually been destroyed by shrapnel. Enter young actor Miles (Frank Cox-O'Connell) in search of agricultural insights and a smattering of farming verbatim for his theatre company, and a place to sleep, in return for lending a hand. Needless to say, he is something of a liability, while remaining enthusiatically naive about the absurd tasks Morgan sets him.
There are all sorts of ethical issues here for (Miles') theatre, of course. But these go way beyond whether Miles is exploiting, celebrating or giving voice to isolated farming communities. Having had his anthropomorphic scenes on stressed cows roundly rejected, he manages to arrange a rehearsal of a story he has heard Morgan tell Angus, about how they returned from London after the war with two girls they had met, had a double wedding at which Angus recited a poem, and how the girls were tragically killed in a car accident, the one trying to protect the other. Such is the power of art that this rehearsal awakens something in Angus's memory, and he wants to see where the girls are buried. Of course, some stories are nothing more than stories, others are true only in part, and Angus does not get to make his pilgrimage.
The Drawer Boy is a subtle, sensitive, tender piece of dramatic writing about memory, the nature of truth and the value of stories. It which requires subtle, sensitive verbal and non-verbal performances. Ian Blower, Mick Stroebel and Frank Cox-O'Connell do not disappoint, although Cox-O'Connell's natural Canadian accent puts him at an advantage here. There are several key periods of silence and numerous monologic narratives - including two reworkings of Hamlet. But these are all well told and the audience in the auditorium was listening no less attentively than the listeners on-stage. An excellent performance of a rather special play.
Jane Sunderland
The Dukes (The Rake auditorium)
Moor Lane, Lancaster LA1 1QE.
Box Office: 0845 344 0642 (local rate applies)
Dates and Times
Until Sat 8 Nov 2008
Performances
· Wed 5 Nov 2008 20:00
· Thu 6 Nov 2008 14:00
· Thu 6 Nov 2008 20:00
· Fri 7 Nov 2008 20:00
· Sat 8 Nov 2008 20:00
Prices
Wednesday - Friday 8pm: £13.50 / £9.50
Saturday 8pm: £15.50 / £10.50
Thursday matinee: £10 / £7.50
Groups: 12+ save £1 per ticket, 50+ save £1.50 per ticket
A limited number of £5 Bargain tickets are available for each performance. Please book on the day, in person, from 10am. Limited to 2 per person.

The Drawer Boy – a playgoer’s guide by Michael Healey
http://www.stthomasu.ca/~hunt/22230001/dbguide.htm

Posted by Jane Sunderland at 18:20 No comments: Links to this post

Email ThisBlogThis!Share to TwitterShare to FacebookShare to Pinterest
Labels: The Dukes, Theatre

The current measures to try and help ailing cod stocks to recover have had a disastrous knock on effect of the entire whitefish fishing fleet, local MEP Sir Robert Atkins said earlier today.

Cod stocks were given a boost recently after the European Parliament backed proposals from the European Commission that aim to update the failing 2004 cod recovery plan, which until now only covered cod stocks in the North Sea, Kattegat and Skaggerak, the Eastern Channel, the Irish Sea and West of Scotland but will soon also include the Celtic Sea, south of the Irish Sea.

Under the current system of micromanagement, fishermen are forced to throw back (or discard) tonnes of healthy fish when they are abundant in catches. New proposals first mooted by the Fisheries Committee will attempt to overcome this by encouraging both fishermen and member states to engage in cod-avoidance programs and efforts to reduce discards of perfectly healthy fish.

The Committee has also proposed that all cod caught ought to be landed, rather than discarded, so as to enable proper scientific evaluation of stocks.

"Every year tonnes of healthy edible fish is tipped back into the sea, despite current food shortages, because of the EU's obsession with recovering cod stocks," Atkins commented.

"More and more fishermen are going out of business because of what is now a futile attempt to preserve a species that has moved out of our waters anyway."

Atkins feels that unless global warming is reversed and the North Sea cools down, cod will not return to our waters and blames climate change, not over fishing, for the decline in fish stock numbers.

There is eveidence to suggest that climate change has contributed to cod decline. A published study of cod stocks off Canada and New England in 2007 showed that the cod stocks grew and declined at about the same time, revealing that environmental factors played a stronger role in the collapse of the cod fishery than previously thought.

Recent scientific advice from the International Council for the Exploration of the Sea (ICES) now suggests that the reductions in cod catches arising from the collective effect of total allowable landings (TACs), technical measures and complementary effort management measures have been far from sufficient to reduce fishing mortality to levels required to allow the cod stocks to rebuild.

None of the four cod stocks covered by the current recovery plan show clear signs of recovery, "although Committee MEPs say that stocks in the North and Celtic Seas are showing some signs of improvement.

"While I back the new proposals, the EU must end its obsession with cod stocks," says Atkins, "otherwise more fisherman will go out of business and we'll continue to see tonnes of perfectly healthy fish simply tossed away."

• Full details of the Fishery Committee's new proposals
Posted by John Freeman at 17:26 No comments: Links to this post

Transition City Lancaster, a local group inspired by the now worldwide Transition Town movement, is inviting everyone from the Lancaster area to particpate and share their experiences and ideas about how best we can meet the challenges of creating a sustainable city in the face of rising energy costs, shrinking fossil fuel supplies, increasing climate change and tightening economic conditions.

TLC will be hosting a day of films, activities and discussions at the Friends Meeting House, Meeting House Lane, Lancater from 10.00 am to 4.00 pm on Saturday 15th November. Admission is free and food drinks, cakes and music will be on offer, along with plenty of opportunities to meet, talk and share the huge wealth of knowledge and experience that already exists in the area.

The Transition Town movement, which has now spread worldwide, started only two years ago in Totnes, Devon. It was started by permaculture designer Rob Hopkins, now the author of The Transition Handbook, who was alarmed at the ecological and social challenges facing us as a society. He responded by developing a model by which people could come together locally to develop what's known as an Energy Descent Pathway, best described here as a community response to the issues raised by the changing world around us in terms of dwindling fossil fuels and more.

The key aspect of the Pathway is that it's primarily developed from the experience and skills of the community and maximises local resilience and knowledge, resilience described by Rob Hopkins as “being able to respond creatively to change and shock.”

"This is a chance for everyone to create the kind of City they would like to see as we meet these challenges," says organiser Chris Hart.

As Lancaster makes the vital social transformations that a low carbon economy needs, the wealth of wisdom, traditions, ideas, fun and creativity are all TLC ask you bring along on the 15th.

• For more information the programme for the day at www.transitioncitylancaster.org or ring Margaret Lyth on 01524 60387.
Posted by John Freeman at 17:07 No comments: Links to this post

Survive and Thrive in the Recession 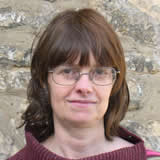 The Green Party's economics spokesperson Molly Scott Cato will be giving a talk entitled Surviving and Thriving in a Recession at the Borough Pub, Dalton Square, Lancaster on Tuesday 11th November at 7.30pm.

The meeting will also see the local launch of the Green New Deal - a plan to tackle the 'triple crunch' of credit, oil prices and climate change originally launched in September at the Green Party's national conference.

In addition to her role as Party spokesperson on economics, green economist Molly Scott Cato is also an expert on the social economy, who specialises in the issues of trade, work, money and cooperatives. She is a Senior Lecturer in the Social Economy at the Cardiff School of Management and Director of the Welsh Institute for Research into Cooperatives. Her book, Green Economics: An Introduction to Theory, Policy and Practice was published by Earthscan late last year.

Cato is a member of the Steering Committee of the No to the Euro Campaign against the single European currency, which the Green Party opposes.

"As the recession looms nearer, we need some good news on the economic front," says Green Party Chair Melanie Forrest. "Everyone is welcome to come along and hear a green view of how to get out of the economic crisis."

Addressing the current financial crisis on her blog recently in a post titled "No Sustainability without Equity", Cato argues Britain is in a "fairly well-protected position relative to our sisters and brothers in the South.

"Because we sit at the high table of corporate capitalism, we can expect an acceptable deal. It will include a lifetime of servitude to pay off recently acquired mega-debts but is unlikely to include starvation and war - at least in the immediate future.

"This unjust and inequitable settlement has severe implications for the planet. While the world's powerful nations ensure for themselves a share that is far more than those in the South, it is also far more than the planet can sustain."
Posted by John Freeman at 10:37 No comments: Links to this post