Opposite of Robot Gig at the YoHo 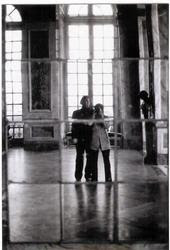 There's a great line-up to Opposite of Robot #10, which takes place at Lancaster's Yorkshire House later this month.

Lead act is The Winter Journey, a classically drilled Brit folk male/female duo from Manchester, who released their debut album This Is The Sound Of the Winter Journey As I Remember It on Timbreland Recordings in late 2008 to much acclaim. The Manchester Evening News declared it "an album oozing a warm-blanket intimacy." and BBC Introducing describing it as"an album of gentle joy that comes laden with tiny pieces of beauty."

Also playing are Ottersgear, the new project of super-talented Mike Kenney, band leader of One Chip Potato and the Transcendental Watermusicians and crazed fiddler with Dan Haywood's New Hawks; Joanne Levey, playing songs her father taught her armed only with voice and an autoharp; and Jo Gillot, a bright young singer-songwriter guitarist who's been wowing audiences lately.

• Opposite of Robot #10 will take on Sunday 22nd February 2009. As usual, it's at the Yorkshire House, Parliament Street, Lancaster. £3 entry, doors 8.30pm. Web: www.myspace.com/oppositeofrobot
Posted by John Freeman at 09:47