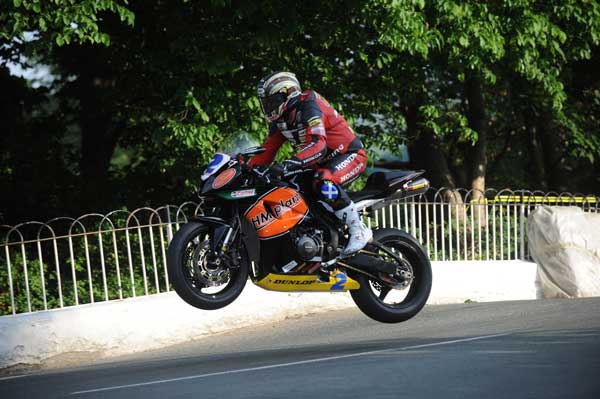 Morecambe's John McGuinnesstook a brace of fifths in the Supersport and Superstock races on Tuesday, the second day of the 2009 Isle of Man TT Races.

The HM Plant Honda rider's first outing came in the four-lap Supersport race and an opening lap of over 124mph saw him slot into fifth place. Having overhauled Gary Johnson on the road, he increased his pace on lap two to maintain his position, although a lap later he was relegated to sixth by teammate Steve Plater.

The combination of a 125mph+ lap and race leader Bruce Anstey retiring on the fourth lap still saw John move back up to fifth at the chequered flag.

Later in the day he was out in the Superstock race on his British Championship Padgetts Honda and the race started brilliantly for John as a new lap record of 128.538mph saw him hold on to first place at the end of the first 37.73 miles. However, he soon ran into problems with the rear tyre and after a couple of major slides he had to ease off and ride at a pace that was more comfortable.

Although he was still lapping in the 126-127mph bracket the record-breaking 129mph+ laps of the race leaders meant he had to again settle for fifth place at the conclusion of the four laps.

"It's been a hard day today and whilst a couple of fifths aren't too bad, I was definitely hoping for a bit more, especially in the Superstock race," said a slightly disappointed John afterwards. "It's the bike I'm riding all year and the race started perfectly when I slotted onto 'P1' but I knew on the second lap that any chance of winning was over. I had a couple of slides at Quarter Bridge and Braddan Bridge and then a major one at Greeba Bridge when my feet were off the pegs and everything. I really thought I was off. After that, I just had to ride at a safe pace and brought the bike home in fifth.

"The pace in today's races has been phenomenal and fair play to the boys at the front but I'll be gunning for them in the final two races this week!"

John has been back out in action this morning on Wednesday when he will be competing in the second four-lap Supersport race.
Posted by John Freeman at 12:04