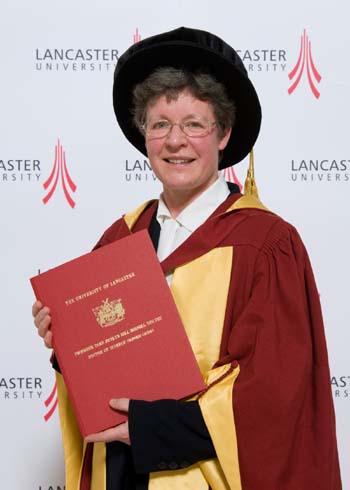 Professor Dame Jocelyn Bell Burnell, one of Britain's most distinguished female scientists and a high-profile economist have been awarded honorary degrees by Lancaster University.

Professor Burnell - an astrophysicist who helped discover a new type of star - and Professor Brian Arthur, an economist who was one of the pioneers of complexity theory, were awarded their degrees by Lancaster University's Chancellor Sir Chris Bonington on 9th December.

As a PhD student at Cambridge, Professor Bell Burnell is an astrophysicist who has worked in all areas of the electromagnetic spectrum, observing new sources from radio frequencies to high energy gamma rays. She has been an outstanding leader of research both at the Open University, where for ten years from 1991 she was Professor of Physics, and then as Dean of Science at the University of Bath, a position she held until her retirement in 2004. She is an enthusiastic and committed communicator of science to the public and a champion of women in science.

Burnell was involved in the discovery of pulsars - highly magnetised dead stars that emit radio waves along their magnetic poles. This discovery opened up a new branch of astrophysics and was later recognised by the award of a Nobel Prize to her supervisor.

She has since received many honours and awards from American and British scientific bodies for her contributions to science. She has been President of the Royal Astronomical Society and in 2008 became the first female President of the Institute of Physics.

In her quest for further knowledge she has used telescopes flown on high-altitude balloons, launched on rockets and carried on satellites. As a high profile speaker and broadcaster she has done much to advance public understanding of science and provided an important role model to women considering a career in the field.