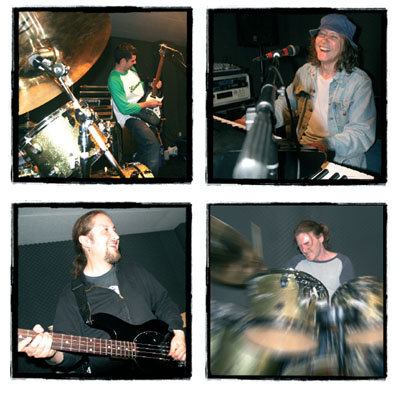 University of Cumbria film maker Russell Cherrington has joined forces with eighties chart-toppers It Bites to try and help victims of the recent devastating floods in Cumbria.

The band, who are from Egremont, have recruited stars from the rock and pop world to record a new version of their classic hit Calling All The Heroes.

The gathering took place on 4th December at Wetton and Downes’ studio near Milton Keynes, the legendary studios of King Crimson and Asia.

The aim is to raise funds to help with the relief efforts in West Cumbria and, apart from It Bites, the recording features the talents of John Wetton, of Asia, Geoff Downes of Buggles and Yes, H from Marillion, Jason Perry from A, plus Jem Godfrey.

The song and is being released as an EP, together with a video shot by Russell Cherrington from the Film and Television Department, of the Faculty of the Arts at the University Of Cumbria.

“As soon as I heard from Bob Dalton of It Bites that they were going to record an all star version of the 1980's classic Calling All Heroes I knew the University of Cumbria should be involved," explains Russell, who has produced videos for Japan, Peter Gabriel and Queensryche. “Charles Mitchell - the Dean of the Faculty of the Arts - pulled out all the stops to make this happen at University level.

“We put together a team of film and television production students and shot the video in Glasgow with Marillion, and in Milton Keynes at a Mansion Studio owned by members of Yes, King Crimson and Yes. The video is almost done and we are going to be involved in the charity concert too.”

• A charity concert for the floods is to be announced soon headlined by It Bites. For more info, check the band's MySpace page
Posted by John Freeman at 10:36