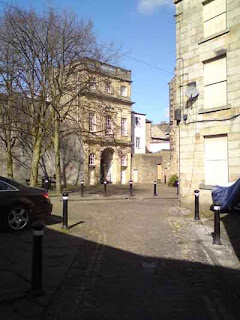 (updated 15/5/09): A major new consultation into proposals aiming to revitalise Lancaster City Centre has been launched by the City Council, but some argue the Council is itself responsible for the poor state of the town's much-loved public spaces.

Supported by funding from the Northwest Development Agency and Lancashire County Council, the Council has commissioned a set of detailed design proposals for a number of public streets in the city centre.

Known as Lancaster Square Routes, the project aims to create a centre which both builds on the city’s history and heritage while still maintaining a modern outlook.

Areas covered by the designs include:
The design team from Gillespies LLP, whose other 'public realm' projects include the re-design of of London's Leicester Square, MediaCity in Salford and many international projects, are working with artists Amenity Space who earlier this year developed design ideas for Market Square with a group of local students. Amenity Space’s designs have been incorporated into the overall scheme.

“Lancaster City Centre has a long enviable history and is a major source of employment and tourism," commented Andrew Dobson, Head of Planning Services.

“Unfortunately, over the years, the centre has deteriorated," he claims, "and we are now faced with a situation where the condition of the streets is poor and cluttered, which does not do enough to showcase its assets.

“Lancaster Square Routes aims to rejuvenate one of the north west’s most important historical city centres and strengthen its position as a major destination both for visitors and residents of the district.”

Councillor John Whitelegg is, however, scathing of what he sees as the council's general attitude to the town's public spaces and argues it has to take responsibility for the poor quality of what is there now - and its support for developments such as that proposed by Centros.

"The condition of the public realm in Lancaster is dreadful," he told virtual-lancaster. "Market Square is a disgrace."

Other issues also concern him. "Cars parked round Dalton Square are unsightly," he argues, "making it people, child and elderly person unfriendly."

Big developments like Centros will not help the town centre improve, he feels. "The city council enthusiastically supports the Centros development and does very little if anything to upgrade the existing public realm. This is dangerous and could easily wipe out the city centre as a destination and leave us with boarded up shops and dereliction."

Recently, the Vue cinema successfully secured permission to 'gate' the thoroughfare between Market Square and Church Street, a traditional right of way that has now been effectively privatised thanks to the Council. For John, who opposed the proposal, this is evidence of what will happen to the town if private enterprise is allowed to ride roughshod when it comes to public spaces.

"I'm very disappointed the cinema got permission to put the gates up," he says, " and this is the shape of things to come. If the dreadful Centros development gets the go ahead we will see much more of this and security guards cleansing the area of pesky people like buskers, Big Issue sellers, animal rights stalls, Its Our City stalls and all the other things that contribute to a rich democratic life."

John argues there is plenty of things that could be done to improve Lancaster without "big company" intervention. "The whole route from Stonewell up to Park Square would make a wonderful "string of pearls" sequence of squares (Stonewell, Dukes, Mill Hall, Gregson Square, Park Square) with no car parking, tree planting, public art and traffic controlled at no more than 20mph," he suggests.

• Members of the public are now being asked for their comments on the Square Root draft proposals before a final set of designs is produced. The designs will go on display in Market Square on 20, 21, 27, 28 and 30 May from 10.00 am to 5.00pm (10.00am to 7.00pm on May 28th) for members of the public to view and make comment upon. A special public participation event exploring the square route will take place on the final day of consultation.

• A special webpage, www.lancaster.gov.uk/squareroutes, has also been set up for those who can’t make it to the consultation events.

• Following the consultation a final set of designs will be drawn up and submitted to the council’s Cabinet. Subject to approval, funding applications will then be submitted to a range of funding bodies to turn the designs from a vision into a reality.
Posted by John Freeman at 17:13 No comments: 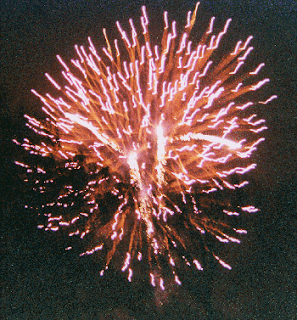 Morecambe’s annual celebration of the seaside 'We do like to Be Beside the Sea!' and the Lancaster Fireworks Spectacular have been nominated for the major award 'Event of the Year' by Lancashire and Blackpool Tourist Board.

Organised by Lancaster City Council, the Lancaster Fireworks Spectacular is heralded as the north's most spectacular free fireworks display which takes place on Castle Hill every year.

Morecambe's 'We do like to Be Beside the Sea!' festival recreates all the period atmosphere and seaside entertainments, enjoyed by millions in the resort’s heyday.

The winner of the Award will go on to represent Lancashire in the North West finals.

• Picture via the Lancaster Priory web site
Posted by John Freeman at 13:17 No comments:

Above: What the revamped Sainsbury's store would look like from the car park. Image courtesy Sainsbury's.

Lancaster City Council has granted planning permission for an extension to Sainsbury's Cable Street store, subject to confirmation by planning officers, which will bring new jobs to the store.

The plans include the addition of a new mezzanine level customer restaurant and small infill extensions to the front and rear of the store, along with improvements to the store interior and a reconfigured car park.

Sainsbury's says the extension will create 13,000 sq ft of extra sales space and around 25 new full and part time jobs.

“Sainsbury's is delighted with the Council's decision to approve our plans to extend the Lancaster store," said Jo Try, Sainsbury's regional development executive. “It's a very popular, city centre store, and the extra space should mean an enhanced shopping experience for our customers as well as creating full and part-time jobs for local people.”

Prior to the planning application being submitted, a public consultation was held including an exhibition of the plans in store. Feedback forms were made available, with 95% of respondents in favour of the proposals.

“We're pleased that the vast majority of respondents were in favour of the extension," Jo commented.

"Our regular customers should benefit from an improved restaurant and wider variety of goods in store and the 25 extra jobs will benefit the local community.”

The store will remain open throughout construction.

Earlier today, Sainsbury’s, which celebrates its 140th anniversary this month, announced an 11 per cent rise in profits of £543million, which will see the company's 120,000 staff share a bonus pot of £60 million, up from last year's £47 million payout. In addition to its Lancaster extension and the new store in Morecambe, the company has also anounced plans for 50 new 'convenience' stores in 2009/10 and 100 in 2010/11 across the UK.

• Sainbury's Lancaster on Sainsbury's web site
Posted by John Freeman at 12:44 No comments: