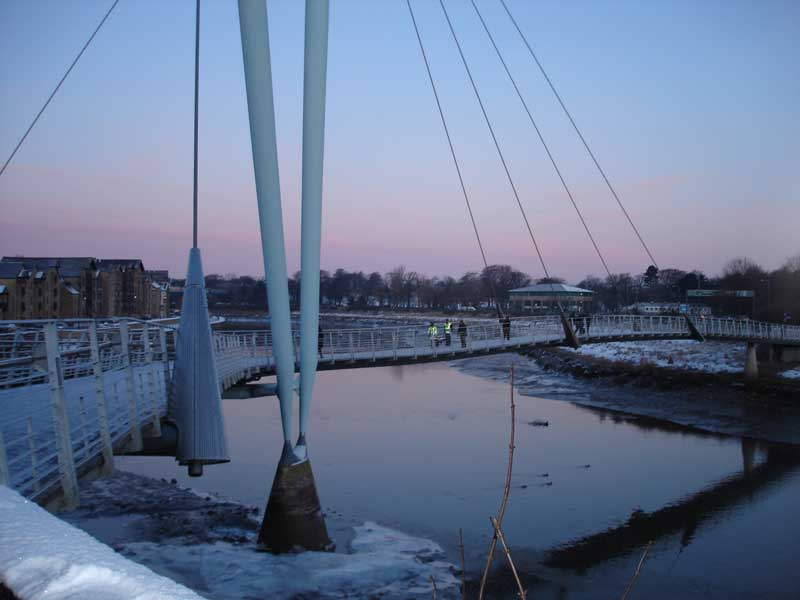 Lancashire County Council may have left its taxpayers in the lurch if they don't live on an A-road or want to use pavements safely - but other local agencies have been working all out to keep the area going. Lancaster City Council, for example, had workers out this morning gritting the Millennium Bridge and cycle path, to the obvious relief of pedestrians. (Although we're still bemused by the apparent lack of gritting of the town centre yesterday).

Meanwhile, police officers across Lancashire’s Northern Division have been making extra efforts to help residents who have been put in difficult – and sometimes life threatening - situations due to the recent heavy snow.

On 2nd January, a 62-year-old man from Poulton was reported missing from home, having left his address in only pyjamas and a fleece. Following a search, PC Vinny Heaton and PC Tony Jennings found the man face down in undergrowth in Brockholes Wood. He was semi conscious and suffering from hypothermia, having been outside for nine hours. The man was airlifted to Royal Preston Hospital.

“Clearly the actions of the officers in locating this man and providing initial first aid have prevented the loss of life, commented Supt Richard Spedding.

On Tuesday, a man in his seventies was reported missing after having gone out two hours earlier in Lancaster to warm up his car. He was eventually found in Langthwaite Road by PC Barry Lees and Andy Massingham. The pensioner had lost control of his car on the icy road and had collided with a wall. With no mobile phone and no other means of getting help he had been stranded for an hour before the officers were able to take him home safely.

Other good deeds have included a PCSO and a PC assisted a pregnant woman who had started to have contractions after slipping and falling in the snow, also on Tuesday.

On the same day, PCSO Keith Russell was on patrol in Thornton when he found the 35-weeks pregnant woman, who had fallen outside a school in Hey Street and was being helped by two members of the public. He and PC Mark Holden, who wrapped the woman in his police jacket, then waited with her for 45 minutes until the ambulance arrived.

Throughout the ordeal the woman was having increasingly more frequent contractions, although these stopped when she arrived at Blackpool Hospital. She is now being kept in for observation.

On the same day, while out on patrol PC Ewan Burford and PC Stu Thompson discovered a milk tanker stuck in a ditch on Chapel Lane, Out Rawcliffe. A farmer had offered to help tow it out, but could not get any traction due to the side on the road. The officers scraped the ice away from the tyres then spread soil on the cleared patch, enabling the tractor to finally pull the wagon out and back on to the road.

Sgt James Martin followed a car that had been weaving across the road in Carnforth on Christmas Day. The elderly driver had a virus and was being sick, making him unsafe to drive any further. Sgt Martin offered the driver and his wife a lift home and then spent 40 minutes transferring the pensioners and their presents across the icy road to his vehicle, before moving their car to a safe place and then delivering them safely home. Unfortunately, he then caught the virus himself!

"Quite rightly, the public expect the police to assist in all circumstances and the recent cold and snowy conditions are no exceptions," commented Supt Spedding. "The incidents mentioned have shown once more the dedication of officers to local communities especially where they have prevented obvious fatal consequences. Let’s not forget that the police also have to cope with the treacherous conditions not only in getting to work but also to conduct their duties.

"I am extremely grateful to the vast majority within our communities who took sensible precautions during the bad weather which decreased our workload to a manageable level. However, there are plenty of examples where members of the public have acted in a reckless manner and not considered the fact that during bad weather life does not go on as normal.

"The snow has also assisted us in detecting crime as fortunately some criminals forget that you leave tracks in snow which has assisted us to track them down and prosecute them!"
Posted by John Freeman at 10:55