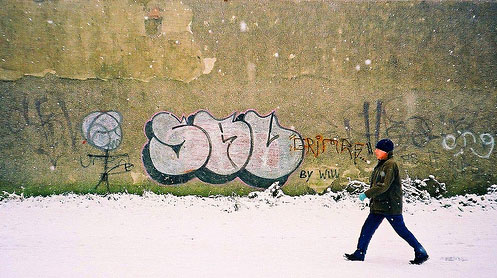 Green councillors have called on Lancashire County Council to prioritise gritting of pavements rather than just major roads.

"Many people, including me, have fallen over in the last few weeks and there seems virtually no gritting of pavements outside the town centre," commented John O'Gaunt ward Councillor Jude Towers. "Lots of old people have been rendered virtually housebound – especially in hilly areas such as Moorlands."

Strangely, some pedestrian areas, such as the White Cross Industrial Estate, which is run by Lancashire County Council, have been gritted in places.

Coun John Whitelegg, who has seen problems on steep roads and icy pavements in his area said: "Residents in Bulk Ward are happy to lend a hand themselves – however, the County Council has refused my request to re-fill the grit-bins on the Bath Mill estate.

"Surely, pedestrians should be a priority in this sort of weather."

Unlike some other councils, Lancashire County Council apparently only provides gritting for roads, according to its web site, prioritising County Motorways and Principal 'A' Roads. Green councillor Jon Barry has contacted County Council officers and asked for a change in policy so that pavements as well as roads are gritted. Green County councillors Sam Riches and Chris Coates will be formally asking for this change in policy at the February County Council meeting.

Councils such as Harringey in London consider pavement gritting based on locations with highest pedestrian flows, combined with highest level of risk associated with steeper gradients. After the town centres have been treated, and if cold conditions continue, the council will carry on gritting pavements according to local conditions where it is needed the most.

Manchester Council grits pavements during prolonged periods of ice or snow, some pedestrian areas such as footbridges, shopping areas, hospital entrances and steep gradients are gritted.