Snow makes parts of Lancaster no go for drivers, pedestrians 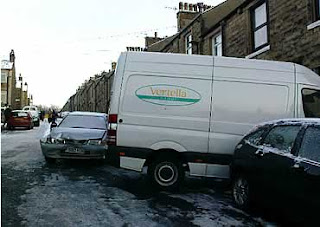 Several of Lancaster's hillier streets have become no-go to vehicles, except to happily sliding bin lid kids, as unfortunate drivers have discovered how slippery the white stuff really gets. In Aberdeen Road, a van came to an abrupt halt as it slid into the side of a house, with help from the vehicle behind (see pic). Think on folks.

We're also told many taxi drivers are now refusing to pick up from addresses on some estates worst hit by the lack of gritting on safety grounds.

The City Council has now undertaken some priority gritting of pedestrian areas which the County has no policy to service. After we reported that City Council staff were gritting the Millennium Bridge yesterday, the Council has issued a statement explaining its role in duties that should be carried out by County.

"Lancashire County Council is responsibile for gritting public highways and pavements," a spokesperson told virtual-lancaster. "Due to the severe nature of the current conditions, city council staff are assisting wherever possible.

"The county council has a list of priority routes for gritting and we are helping to keep these areas clear on their behalf.

"In addition, we are clearing areas of our own land where it is beneficial to do so. The Millennium Bridge is owned by the city council and due to the nature of the structure, and it being an area of high pedestrian footfall, we have used a special chemical to clear it of ice."

Green Councillors have put forward a motion for Full Council on 3rd February, congratulating the hard working staff that undertook gritting operations over the Christmas New Year period and proposing that in future, the County Council provide a comprehensive network of grit bins throughout the district and ensure they are filled before the start of the winter
gritting period.

The proposal aims to set a way forward for future cold spells, bearing in mind the difficulties experienced by thousands of our residents and taxpayers and that resource constraints do not allow for every path to be gritted by council staff.
Posted by John Freeman at 11:47