Wassailing Tradition Makes it Three in a Row 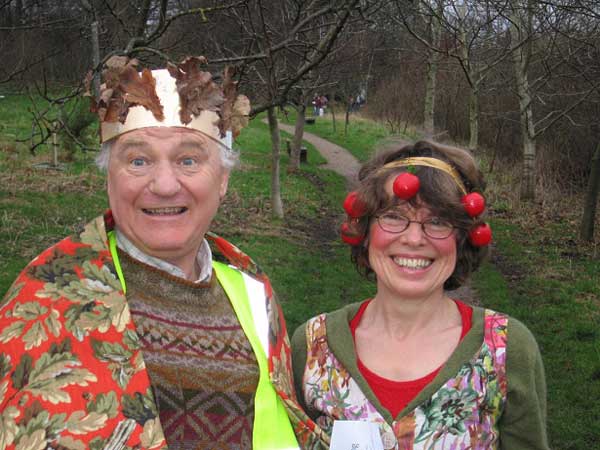 The Fairfield Association will be hosting their third traditional Wassailing event on Saturday 16th January.

This will be the third time in living memory that Lancaster has hosted a Wassailing – the first two years were a rip-roaring success with over 100 people in attendance. It follows another year of successful events hosted by the Fairfield Association, a registered charity founded in 1996 which saved a long-established children’s play area (Fairfield Green) from development and is currently working towards establishing an urban nature reserve on farmland near to the Millennium Green and Community Orchard.

"Wassailings are traditionally held in the cider making counties of southern England, but since Lancaster boasts its own public orchard we decided to bring the tradition to the North West," explains Andrew Brennand, the event’s organizer. "We were bowled over by how many people attended the last couple of years and hope that everyone who has been before will attend again and tell their friends.

"With a bit of luck this will become a popular new tradition in Lancaster – it's certainly something to fill those dreary days after Christmas!"

There will be a range of activities suitable for both children and adults, starting with a noisy procession to Fairfield Community Orchard at the end of Sunnyside Lane, Lancaster, at 3.00pm sharp. People are encouraged to bring pots, pans and drums. The procession is intended to scare away any evil spirits who might blight the crop in the year
to come.

Not many people believe in evil spirits these days, but there is some evidence that making a big noise at this time of year actually disrupts the natural cycle of parasites that damage the trees. You could say that the content of the centuries old Wassailing ceremony is actually backed by modern science.

Following this there will be a traditional Mummers Play performed by the Stone the Crows Morris side from Leyland. These plays are also traditional and have a heritage going back at least five hundred years.

"Some people believe that these plays go all the way back to the time of the Crusades," Andrew reveals. "Although the texts of all Mummers Plays are quite similar, the version being performed will be an adaptation of the original Lancaster Pace Egging play that
originates in this very city."

Included in the afternoon’s proceedings will be the choosing of an Oak King and Apple Queen to rule for a year, so people are requested to attend in Fancy Dress if they want to be considered for these prestigious roles. The Oak King and Apple Queen will make the traditional offerings of cider to the trees and begin the passing round of a Wassail Bowl.

The event will finish with the performance of traditional Wassailing songs around a bonfire.

• The Wassailing takes place on Saturday 16th January 2010 between 3pm and 5.00pm in the Fairfield Community Orchard at the end of Sunnyside Lane, Lancaster. All funds raised will go towards the upkeep of the orchard. There is a suggested donation of £1 per attendee.

• More about the Fairfield Community Association at: www.fairfieldassociation.org


• Read more about wassailing on the White Dragon web site

• Read about Celtic myth and druids on www.druidry.org

Pictured: The Apple Queen and Oak King of 2008