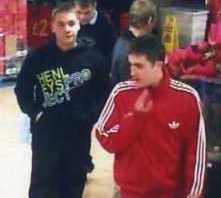 Police are appealing for information after a shopper was verbally abused in a supermarket.

The victim was shopping with friends at Asda on Ovangle Road Lancaster at 10.30pm on 12th February 2010 when a group of males who were stood behind him started making homophobic references towards him.

The victim challenged one of the group, who then became aggressive and threw a lime at the victim.

This person was described as a white male, approximately 20 years old, of slim build, with short dark hair and wearing a red Adidas tracksuit top and blue jeans.

PC John Wilson said: “This was an unprovoked attack on an innocent member of the public and these attitudes are not acceptable. Any information will be useful in bringing these offenders to justice.”


Pictured: two members of the group, one in an Adidas top and one in a Henleys top.
Posted by John Freeman at 10:38