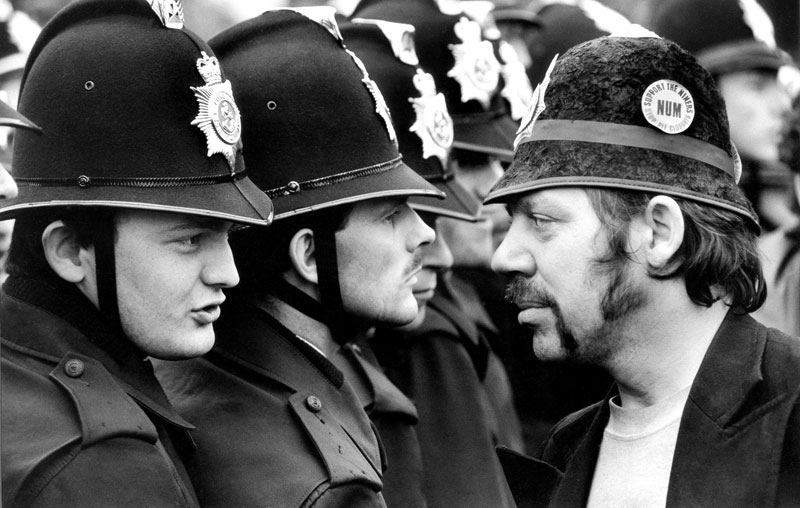 Influential photojournalist Don McPhee, one of the great photojournalists of the last 30 years, is the subject of a new exhibition at the University of Cumbria’s Alexandra Gallery on the Lancaster campus from Friday 23rd April until Friday 14 May (weekdays 9.30am until 4.30pm).

Don McPhee, who died in 2007, is renowned as one of Britain’s finest press photographers, and his work will be on show in a free exhibition entitled ‘The View from the North’. McPhee worked at the Guardian’s Manchester office for 35 years, famously documenting life in the North from political strife to everyday lives.

His most iconic image, above, was taken during the 1984 miner’s strike and depicts a striking miner wearing a plastic policeman’s hat staring down a row of policemen guarding the Orgreave coking plant in Sheffield.

"Don McPhee was one of the kindest and most generous photographers I've ever worked with," notes photographer Dan Chung in an online tribute written after McPhee died. "He was one of my photographic heroes long before I joined the Guardian. What I admired most were his great skills of observation - his pictures always managed to convey the true atmosphere of the north of England."

A talk by McPhee’s Guardian colleague David Ward will take place in room 123 of the Alexandra Building from 4pm on Thursday 22 April. In this illustrated talk, Ward will remember the 30 years he and McPhee worked together on big and sometimes ludicrous stories from the Guardian’s Manchester office.


• A Gallery of Don McPhee's work at The Guardian

A gallery of Don McPhee's best pictures for the Guardian with commentary from the paper's picture editor, Roger Tooth