Musicians Co-op Cleans Up its Act!

Miscians in Lancaster and Morecambe are joining forces on Saturday 29th May for a special clean up day to celebrate the 25th anniversary of Lancaster Musicians Co-op.

Supporters of the rehearsal rooms and recording studio in Lodge Street, Lancaster, are giving the dilapidated building a spring make-over and are looking for businesses in the area to give them a helping hand.

"We've got our 25th anniversary this year," explained David Blackwell, one of the Co-op’s directors. "We don’t receive any revenue funding from funding bodies or the city council so a group of volunteers have put themselves forward to help us do up the building and improve facilities."

Lancaster Musicians' Co-op was founded back in 1985, by a group of ex-Lancaster University Students looking for a place to rehearse. The organisation has spent 25 years trying to get a long term lease or purchase the building from Lancaster City Council so they can raise funds to renovate the building, a vital resource for musicians in the Lancaster and Morecambe district with between 50 and 100 bands practising or recording there each week.

Previous users include Paul (The Rev) Mayers (Towers of London, The Prodigy) , Tom English (Maximo Park), Paul Tipler, Producer (Idlewild, Stereolab), Keith Baxter (3 Colours Red), Mark Hunter (James). Within the last year at least two bands who use the co-op have been played on Radio One and Radio 6 Music (The Lovely Eggs, The Heartbreaks). 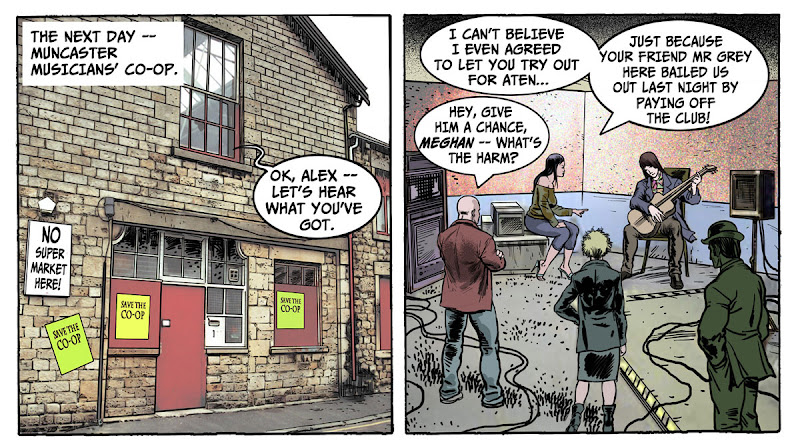 In 2003, the Co-op even featured in a short-lived (and unfinished) comic strip published in an Italian magazine using comic strip to teach English as a Foreign Language, with the full permission of the organisation at the time ('Lancaster' became 'Muncaster' for the story).

Over 300 people have joined the Music Co-op’s 25th Anniversary Facebook group, with many signing up to take part in the event - which has been dubbed ‘The Big Spring Clean’.

"The support had been amazing," said David. "We're now asking for businesses to come forward to show their support for us by giving us donations of materials.

"We are looking for donations of paint, fibreboard or light ceiling material, wood, heavy duty carpets and doors.

"Ideally we would love to put on a new front door, as well as a new sign, rebuild a staircase inside and fix the leaking roof.

"If anyone has any materials that could be of use to us, please get in touch."

The Co-op, whose past patrons include Tom English from Maximo Park, have also approached Promenade Music to help them source equipment and are also looking for skilled volunteers such as joiners and roofers to help carry out the work on the day.

"We really need everybody’s help with this," David asks. "If everybody comes together on one day it will make a massive difference to our users. “We really want to improve facilities for the people who rehearse and record here."

• For information on how you can donate or volunteer contact 01524 388544 or email musiccoop@hotmail.co.uk