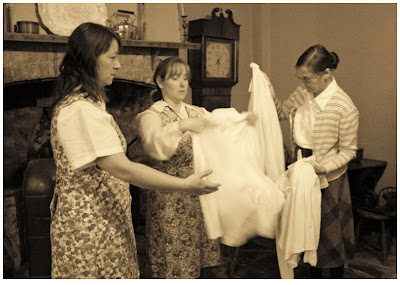 Set two miles outside the Donegal village of Ballybeg in 1936, Brian Friel's Dancing at Lughnasa is a sad play. And this sadness is rendered particularly poignant through dramatic irony: the narrator, Michael, tells us much of what will happen before it actually has. The reason Michael (Andy Dobel) can do this is because he is the son of one of the five sisters, Chris (Maria Major), and hence the nephew of the other four: Kate (Lesley Edkins), Maggie (Paula Baldwin), Agnes (Louanne Hayhurst) and Rose (Jo Barlow), and because he is telling the story as an adult. This works well: black-clad Michael's temporal distance is also shown through the other characters forming tableaux when he addresses the audience; when the sisters are addressing him as a child, he actually stands just behind them. Excellent direction here by Ros Bentley.

But even without Michael's advance warnings, unsustainability and signs of demise are there from the start. The main characters Time and Social Change are not listed in the programme. Eldest sister Kate is trying to keep the family together, surviving economically (just) and respectable in the eyes of the community, always guided by the Catholic church. But the forces against her are several, and strong. Michael, much-loved, is indeed a love-child, and his father's (Tom O'Beirne) occasional visits bring with them reminders of his native Wales, of travel, of the Spanish Civil War, and promises of gifts. The sisters' brother (actually Father) Jack (Bryan Wood) has recently returned from church work in Uganda, dismissed because of his embracing of local spiritual practices - which the disoriented Jack (who speaks as if he were still in Uganda) narrates to his sisters in shocking detail.

Even Ballybeg has its own 'Back Hills people', who celebrate the Festival of Lughnasa in distinctly non-Catholic fashion. Economically, changes are about to put an end to Agnes' and Rose's contribution to the tiny family income from knitting endless pairs of grey gloves. And then there is the new Marconi radio, which lets music into the house: not when anyone switches it on, but in an entirely unpredictable, uncontrollable manner. And music means dancing, and more dancing, which Kate tries to limit, but never completely succeeds - even in herself.

There are internal tensions too. Although the five female actors do an excellent job of presenting the family as loving and caring people who look after each other, they also show Maggie as far from indifferent to Gerry, and Gerry himself as having (and as always having had?) an eye for Agnes as well as Chris. The simple-minded Rose spends several hours alone with a married man and the sisters have very different ways of dealing with this. Kate longs for Father Jack to say Mass again and to bring some renewed respect for the family, but this is clearly not going to happen. Indeed, his embarrassing presence leads to Kate losing her job as a parish school teacher.

Much of the acting is excellent and worthy of a professional production, and I would single out Paula Baldwin, Maria Major and Andy Dobel here. Paula Baldwin in particular does full justice to those lines in which the monotony, predictability and poverty of the sisters' lives is treated with a bitter humour. The sisters' Irish accents (at least to this reviewer with an English accent) were convincing - and full marks go to dialect coach Caro Kelly here.

Acts 1 and 2 both just occasionally felt a little laboured, perhaps because of insufficient changes of pace in delivery. But this is a small gripe. Ros Bentley's Dancing at Lughnasa is a serious and moving production, well worth the price of the ticket.

• More about Dancing at Lughnasa on Wikipedia

Posted by Jane Sunderland at 22:27