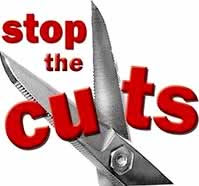 72% of the cuts being brought in by the Con-Dem coalition will come from women's pockets, claim a new Lancaster group 'Women Against the Cuts' who will be joining the protest march through Lancaster City Centre at noon tomorrow in their unions, community groups and side-by-side with a city unsettled by the proposed job losses and savaging of public services and benefits to the poorest and most vulnerable in our communities.

The march has been organised by Lancaster & Morecambe Against the Cuts, an umbrella organisation of trades unions, voluntary and community groups, to protest the unfairness of the outcome of the government's spending review which they believe is set to widen the gap between rich and poor and create a two nation state where unemployment, homelessness, destitution, lack of education and isolation will become the order of the day for those who don't or can't fight back for themselves and their families.

A Lancaster Feminist group has been tracking the effects on women of the cuts researched by the Fawcett Society, which reports to the government on the differential impacts of polices on women. Summarising this research, Lancaster Women Against the Cuts explain:

"Because of pregnancy and family care, women are still disadvantaged in the labour market and too many are in the part-time, low paid jobs that are always the first to go. Women rely on benefits twice as much as men do.

"Cuts in Child Tax Credits, Working Tax Credits, Child Benefit, Housing Benefit and pensions will disproportionately hurt women. The two most vulnerable groups have been identified as lone parents, 90% of whom are women, and women single pensioners.

"Women make up 73% of local authority services employees and 77% of the NHS workforce. Cuts to these services depend on the unspoken assumption that women will just be forced home to fill the gaps, taking on more and more unpaid care and domestic work to support the whole family’s caring needs. And our neighbours’ too, unless we want to watch them suffer.
The Tory / Lib Dem plans rely on women’s unpaid coping work at home and in the community replacing paid jobs.

"The quality of care services for all elderly people in this country is a national scandal but because women tend to live longer than men and women’s pensions are on average 60% less than men’s, older women are particularly vulnerable to cuts in care services.
Public services are not ‘charity’. They are our right!

"The annual deficit is £70bn - but the 1000 wealthiest individuals make £77bn in a year and £120bn of tax is dodged by the rich. Yet they are still fixing 72% of the cuts to the budget to come from women’s pockets. These cuts are stealing the progress made by women over the past fifty years and blighting the hopes of future generations of girls who will have to pick up what we leave."

"We’re not having this. We’re not here just to be exploited. We’re going to pull together and fight back in our workplaces and communities – everywhere!"

Visit the lancaster and Morecambe Against the Cuts website at http://www.lmatc.org.uk/.

You can contact Lancaster Women Against the Cuts by emailing
womenagainstcuts[AT]lists.aktivix.org
Posted by Chris Satori at 11:35