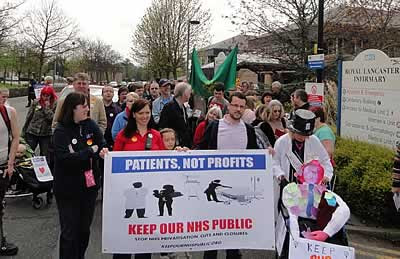 Participant report: Lancastrians opposed to the Coalition Government's plans to restructure the National Health Service staged a peaceful demonstration outside the Royal Lancaster Infirmary on Saturday 16th April. Protesters objected to the substantial cuts already being implemented across the NHS, in an effort to reduce its costs by £20 billion, which has resulted in growing waiting lists and an ongoing programme of redundancies for more than 53,000 doctors, nurses, midwives and other NHS staff.

Many believe the conservative government, which has historically opposed state health and welfare provision, has tailored the proposed system of GP commissioning of services to encourage privatisation of NHS assets. Much current provision, such as multi-agency child protection, has been forgotten from the proposals, which are basically about reordering the healthcare market.

About a hundred protesters marched through the streets to Market Square where shoppers were able to sign a petition of support for the NHS, opposing NHS cuts, privatisation and restructuring. Many also took the opportunity to apply 'cathartic acupuncture' to an effigy of Mr Cameron, and his little Clegg hot water bottle, skewering them with messages on spikes, which certainly seemed to induce a sense of well-being in the practitioners;-)

Despite the claims of Conservative Health Minister Andrew Lansley that around 6000 GPs have already expressed an interest in GP commissioning (there are approximately 25,000 GPs in England alone) Dr David Wrigley, regional speaker for the British Medical Association (BMA), which opposes the Con Dem restructuring scheme, explained at a meeting later in the day that this is simply a lifeboat measure 'if you are on a ship and it's been torpedoed, taking the only lifeboat you can see available doesn't mean you want the ship to sink'.

Both the BMA and the Royal College of Nurses (RCN) are overwhelmingly opposed to the Con Dem coalition's restructuring plans, which have proved so unpopular with the British public that the PM has called a 2 month recess 'for listening'. Two weeks in it is still unclear what form this 'listening' is to take or how it might affect the proposals. Cuts and redundancies are still being implemented across the board, without consultation. Sceptics say Cameron is simply holding off on the unpopular GP commissioning scheme until after the local elections on 5 May, after which the Health Minister will be let off the leash.

Following the RCN's unprecedented 99% vote of no confidence in Health Minister Andrew Lansley, he responded loftily that he was sorry that they had been unable to properly understand his proposals. Some might say he needs a trip to the Hearing Clinic but it seems more likely that he has an appetite for confrontation in his privatisation mission, with the nurses first in his sights, as hundreds have lost their jobs in the last week.

Visit www.38degrees.org.uk and join the campaign to save the National Health Service.

Visit Lancaster and Morecambe Against the Cuts on Facebook
Posted by Chris Satori at 09:53

Email ThisBlogThis!Share to TwitterShare to FacebookShare to Pinterest
Labels: Lancaster and Morecambe Against the Cuts, NHS privatisation