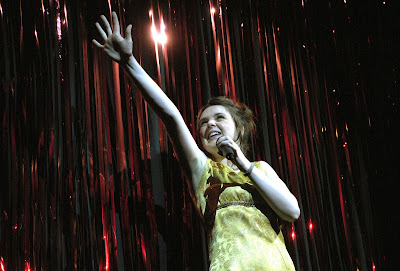 The Dukes is celebrating the birth of a star in Rebecca Hutchinson, who plays the lead role she plays in their current show The Rise and Fall of Little Voice, getting rave reviews.

In a four star review, the national Guardian described her performance as remarkable, while audiences have been full of praise for a show which features comedy and song yet has a moving story at its heart.

Written in 1992, The Rise and Fall of Little Voice is very much a story for the X Factor generation as Little Voice’s talent for imitating the great divas is spotted by talent scout, Ray Say, played by Lancaster-born National Theatre actor, Keiran Flynn.

"It's a minor miracle that the play has had any kind of continued production history at all, having specifically been tailored to expose Jane Horrocks's uncanny ability to impersonate the great popular divas from Gracie Fields to Judy Garland," notes Alfred Hickling in The Guardian. "Yet it was successfully revived in the West End with X Factor contestant Diana Vickers; and here it is the remarkable Rebecca Hutchinson who proves capable of switching from Bassey to Piaf and back again in a single breath."

There's praise to for other cast members, with The Stage noting Eithne Browne is "faultless as the hard-faced, drunk, bitter, man hunting mother Mari Hoff.

"Likewise, after an initial overdose of early nineties sleaziness, Keiran Flynn perfectly captures the desperation of Ray Say, the failed performer who feels he has stumbled on the chance to clamber beyond representing ageing strippers and clubland no-hopers."

The Rise and Fall of Little Voice closes on April 16 so there’s only a few days left to enjoy this great night out at the theatre.