Fireworks Festival back with a bang! 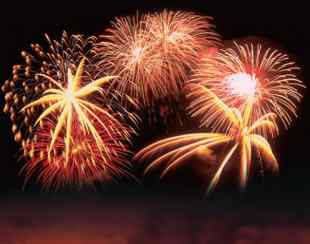 The skies above Lancaster will be ablaze with colour once again when Lancaster City Council launches its 2011 Firework Spectacular.

This year’s pyrotechnic spectacular takes place on the big day itself – Saturday, November 5 at 8pm – and is shaping up to be bigger and better than ever before.

To warm you up for the evening’s event, there will be city centre Guy Fawkes themed activities to enjoy during the day including guided walks, storytelling, arts and crafts and lantern making workshops at the museum. There will also be music from the amazing Batala Lancaster samba drum band and safe fire-building sessions for accompanied youngsters with the play rangers at Williamson Park. You can find details of all these activities listed in our events calendar at www.virtual-lancaster.net/whatson.

All those taking part in the lantern making will be invited to join a procession from the city centre to St. George’s Quay to mark the start of the evening’s firework festivities.

As last year, the castle and priory precinct will be closed to the public, but spectators will still be able to watch the action at close quarters from nearby Quay Meadow below.

Accessed from St George’s Quay, Quay Meadow has been used unofficially by people for many years to view the fireworks and is in the heart of the city’s historic quayside area, with an amazing backdrop of Lancaster Castle and the Priory Church.

It’s also close to the firing zone and will allow people to get as close as possible to enjoy the atmosphere as the fireworks are launched.

BBC Radio Lancashire will be broadcasting live from the Maritime Museum and Quay Meadow from 7pm so come along and meet presenters Graham Liver and John ‘Gilly’ Gillmore. Food will be in plentiful supply courtesy of local businesses including the Wagon and Horses and Simply French.

The other main viewing area will be Salt Ayre, where last year more than 2,500 people enjoyed the spectacular view across the river. Festival goers viewing the display from Salt Ayre will also be able to enjoy free parking, hot food and drink and Taylor’s Funfair!

Other official viewing areas include:

Admission to all viewing areas is free.

If you can't get to one of the venues, watch the fireworks, which start at 8pm, from wherever you are in the district and listen to the specially coordinated music on BBC Radio Lancashire – 104.5FM. The music will also be played at all of the official venues.

This is a hugely popular local event, with good reason. Enjoy!!!!

(And of course, don't forget that your pets are not so keen on pyrotechnics, and are best kept safely indoors on the night.)
Posted by Chris Satori at 12:01