PCSO Dave Edwards, of Garstang’s neighbourhood police team, has recently returned from South America where he made the mammoth trek on a mototaxi – a three-wheeled 125cc motorbike. His journey took him through the Amazon and over the Andes, taking around two-and-a-half-weeks to complete.

The 27-year-old, who joined Lancashire Constabulary in 2009, carried out the challenge in order to raise funds for Marie Curie Cancer Care in memory of a friend’s father.

“It was a fantastic trip," says Dave, "and it was made even better by the fact that I knew I was raising money for such a good cause. The mototaxi was not the most comfortable method of transport and it broke down pretty much every day – I think I could probably fix a 125cc with my eyes closed now.

”The people we met along the way were amazing and the scenery, especially the mountain roads, was epic.” 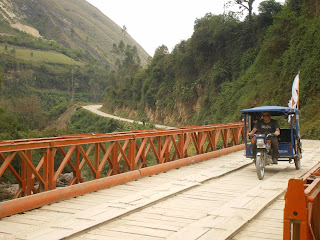 Dave drove along three-metre wide mountain tracks, while trying to avoid the 3,000 metre drop at the side of the road and was given a police escort into Cusco after officers stopped to help him change a wheel (having first laughed and called him crazy for making the trip on a mototaxi.)

• Anyone wishing to sponsor PCSO Edwards can do so by using the Just Giving link www.justgiving.com/planf or you can text PLAN99 plus the amount you wish to donate to 70070.
Posted by John Freeman at 09:53