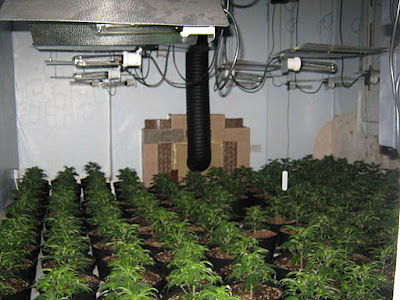 Two Vietnamese nationals who cultivated a cannabis factory worth almost £400,000 have been jailed for a total of four years.

Officers discovered the 1,000-plant factory in a property on Alexandra Road, in Morecambe's West End, on Monday 29th August following a report of a break-in at the address.

A number of discarded cannabis plants were found outside the premises and an operational support unit was then called upon to gain entry to the building. Inside, officers discovered a large-scale sophisticated cannabis production set-up on all five floors of the house, with in excess of 1,000 plants at various stages of growth or harvest. The plants had an estimated street value of around £400,000.

Dung Pham, 28, and Canh Le, 21, of no fixed abode, were arrested and charged with producing a class B drug. Appearing at Preston Crown Court today (Friday 25th November) both were jailed for two years.

“This was a significant seizure of cannabis plants from a very organised and sophisticated production system," noted Detective Sergeant Simon Dent from Lancaster CID. "The seizure of these plants, along with equipment being used to grow them, has ultimately prevented a large amount of drugs from reaching our streets.

“We know that cannabis usage has a number of knock-on effects which cause problems for out communities," he added, "crimes such as burglary, car crime and robbery are often committed to fund a drug habit.

"We are committed to tackling those who produce and sell drugs and the sentences given to these two offenders reflect our dedication to removing drugs from our neighbourhoods.”

It looks like they must have been very tidy, conscientious workers. And quite sure-footed too, to get between those rows. These boys look hungry and run-down though. Sleeping rough? Or working their rent. All that kit and installation materials costs what? £2-3000 minimum. Plus site costs. Who is running this show?