Transition City Lancaster's Samagita tells us there are now 8 gardens around Lancaster whose owners are willing to share. This is a chance for people who want to grow veggies and have no garden or allotment to start growing.

The garden owner gets a well kept plot and a share of the produce, the pleasure of seeing veggies growing, making a gardener happy and making a real contribution to building a sense of community.

The project is part of Transition City Lancaster who will make careful introductions of garden owners to gardeners and be on hand to help it all work well for everyone. NO money is involved – it is all a voluntary sharing of resources. We have specialist garden advice available for peace of mind.

To find out more - please contact Joy on 01524 69038 or else on gardensharejoy@yahoo.co.uk To find out more about Transition City Lancaster please see
www.transitioncitylancaster.org
Posted by Chris Satori at 11:43 No comments:

Lancaster City Council has published a list of candidates standing for the city council and parish council elections which will take place on Thursday May 5.

Paper copies are available for viewing in the customer service centres at Lancaster and Morecambe town halls or you can download the lists as PDFs.
Posted by Chris Satori at 11:35 No comments:

Ahead of its time, as ever, the Lancaster May Day March and Rally 2011, celebrating International Workers' Day, will take place on Saturday 30 April. Marchers will meet at Thurnham Street car park and the march will set off at 11am to go through streets to reach Market Square about 11.45
There will be a rally and speakers in Market Square, from NHS, Education, the Post Office, Arts, Students etc
A stall will be set up in Market Square for a mixture of leaflets and petitions.
Organised by Lancaster & Morecambe Trades Union Council and friends.
All welcome
Workers of the World, Unite!
Posted by Chris Satori at 10:13 No comments:

NHS Day of Action Protests in Lancaster This Saturday

A series of events is planned tomorrow to mark the national day of action against the proposed restructuring of the NHS. This follows a week in which the Royal College of Nursing voted overwhelmingly in favour of a motion of no confidence in Health Minister Andrew Lansley, and PM David Cameron has called a 'pause' in the restructuring, presumably until after the local elections are safely out of the way.

The peaceful protest gathering will take place outside the Centenery Building of the Royal Lancaster Infirmary on Saturday 16 April at 1pm, and it is in support of the NHS.

The protest will continue into Lancaster's Market Square at around 2-2.30pm for a mass leafletting and an opportunity to sign the petition against the restructuring proposals, which are considered by many to be a dismantling of the NHS in a move towards a privatised health system. The proposals are the brain child of the health minister, who apparently has been working on them for seven years, although they did not appear in any manifesto. Indeed, the tory manifesto has always contained pledges to safeguard the NHS, pledges now in tatters as thousands of nurses face redundancy.

At 4.30pm. Dr David Wrigley, speaker from the BMA will be speaking at the Friends Meeting House about why the BMA opposes the government restructuring proposals.
Let's make this event huge. it’s our NHS, our lives depend on it and we need to fight for it.
www.keepournhspublic.org
Sign the 38 Degrees petition against NHS cuts and privatisation at:
http://www.38degrees.org.uk/page/s/Protect_our_NHS_Petition#petition
Posted by Chris Satori at 09:52 No comments:

Police are to concentrate their patrols into streets that have become hot spot areas for burglars targeting insecure homes - and are reminding people to take care when going out not to leave windows and doors unlocked.

Analysis of reports of burglary has highlighted a number of streets in Morecambe that are consistently being subjected to break-ins because residents are leaving doors and windows unlocked.

As a result, neighbourhood police teams will step up their patrols in these areas in order to provide a visible deterrent to thieves. Officers will also be handing out crime prevention advice and urging residents to secure their home when they go out or when they go to bed.

“An unlocked door or a window left ajar can act as an open invitation to a burglar," notes Sergeant Lindsay Brown from the Morecambe neighbourhood police team, "many of whom specifically prey on those who have left their homes vulnerable.

“Burglary figures are low in the area, but we do tend to see a rise when the weather starts to get better and doors and windows are left open. Residents have a crucial part to play in making it difficult for thieves to operate – taking a few simple crime prevention measures can help do this.”

“Please lock all doors and windows when going out or when in the garden," he urges. "Put all garden tools away and lock your shed or garage.

“Don’t be careless with your personal belongings, even around your home. Place them out of sight. Incidents of burglary are low in Morecambe and we want to keep it that way.”
Posted by John Freeman at 16:17 No comments:

Morecambe police are appealing for witnesses after a man was assaulted after a night out at the weekend.

The offence occurred at around 3.00am on Saturday morning (9th April 2011) as the 19 year old man was walking along Back Morecambe Street after a night out.

Unfortunately, the details around what happened are currently quite unclear but it is thought the offender was wearing a grey-hooded top.

The victim suffered a cut lip and had a lump and bruising on the side of his head as a result of the assault and police are appealing for anyone with any information to come forward.

PC Sue Smith said, “We are still trying to piece together what happened and so I would urge anyone who may have been in the area at the time to come forward and contact police if they saw anything at all suspicious.” 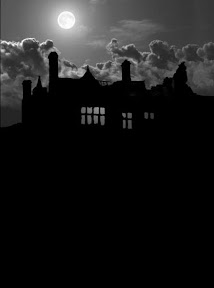 The Grand will be dreaming of Manderlay all week as Lancaster Footlights presents Daphne Du Maurier's Rebecca.

In the play, based on the novel first published in 1938 that made du Maurier one of the most popular writers of her time, Maxim de Winter marries a woman half his age only a year after the death of his first wife - the beautiful and accomplished Rebecca.

Maxim's naive young bride is overwhelmed by her new responsibilities and soon discovers that her predecessor still has a strange hold over everyone, especially the sinister housekeeper Mrs. Danvers, who despises her for taking the adored Rebecca's place.

Behind the beautiful gates of Manderley, the darkness of the past taints the present and threatens the future ...

As well as the novel, Rebecca Daphne du Maurier successfully adapted it into a play, first presented in 1940, starring Celia Johnson and Owen Nares as the De Winters and Margaret Rutherford as Mrs. Danvers. It was adapted into an Oscar winning film by Alfred Hitchcock (also in 1940) and several times on television.

This production of Rebecca is the latest work of Lancaster Footlights, a thriving amateur drama group which approaches its work very "professionally." They first started performing in the 1920's, and purchased the Grand Theatre in 1950 to save it from demolition. Ever since that time, the group has devoted its time and effort between theatrical productions, and the continuous work involved in running, maintaining and restoring an historic building. They currently produce five plays per season, including a traditional Christmas pantomime which is specifically aimed family enjoyment, in addition to one-act plays and a Youth Theatre production. 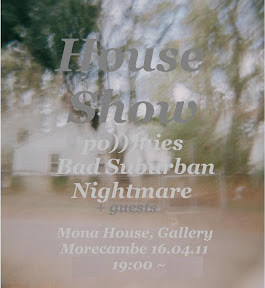 On Saturday 16th April future~pizza (www.futurepizza.blogspot.com) and Mona House (www.monahousegallery.com) will present 'House~Show' - an evening of new music from the local area and beyond - at Mona House Gallery in Morecambe.

Mona House is an independent community arts collective based in Morecambe. Situated at 1 Deansgate Morecambe, between Ma Murphy's and The Bradford Arms, Mona House is home to a growing collective of local artists hosting exhibitions, film screenings and live performance.

On the evening of the 16th, local songwriting platform po)))nies will be showcasing new material and London based guitar explorer Daniel Hrekow will play several compositions from his Bad Suburban Nightmare. Fans of North American noise explorers Earth and Sun O))) will not be disappointed!

Doors will open for the House Show at the Mona House Gallery, Morecambe, at 7.30pm. Admission will be by donation and guests are reminded to bring their own refreshments as Mona House in not a licensed premises.

• For more information visit www.futurepizza.blogspot.com/ or www.monahousegallery.com
Posted by John Freeman at 12:58 1 comment: