The Really Heavy Greatcoat Review of the Year 2011 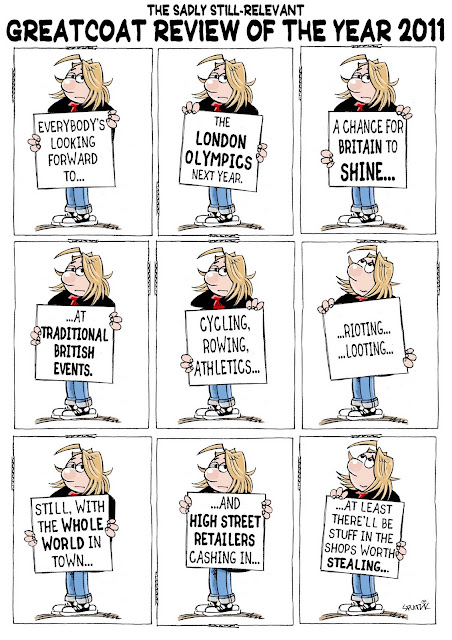 Older readers may recall The Really Heavy Greatcoat by John Freeman and Lancaster-based artist Nick Miller ran on virtual-lancaster after long service in On The Beat and Off the Beat, two other alternative Lancaster publications, for many years.

If anyone ever offered to pay us to write it, it might still be running today!

• More by Nick at: http://teamsputnikblog.blogspot.com

• The Really Heavy Greatcoat Archive: www.downthetubes.net/fiction/strips/greatcoat/about.html
Posted by John Freeman at 09:00 No comments:

Almost 500 people across Lancashire wanted for recall to prison have been arrested and sent back to jail this year.

Figures show that from 500 people released to be supervised in Lancashire but who then failed to keep to their terms of their licence, there are fewer than 20 outstanding.

Earlier this week, wanted Preston man Daniel Billington, who has been wanted on a prison recall since February 2008, was arrested in Tenerife by Spanish police. Arrangements are being made for him to be brought back to the UK for him to be returned to prison.

“It has been a busy year for Lancashire Police in tracing and arresting those who have been released early from their prison sentence but have failed to comply with the conditions of release," notes Inspector John Clucas. "Our officers have worked hard to ensure those that choose to ignore these conditions are promptly brought back into prison to serve the remainder of their sentence.

“As with many things in policing we cannot do this without the help from members of the public, and friends and acquaintances of those who are wanted.  We just need that little bit of information in some cases that will lead us to the person who we are seeking to arrest.

“I know we will not reduce our efforts in 2012 and from the Lancashire Constabulary the message is clear, those who offend will be identified and where possible brought to justice, those who are punished will be expected to comply with their sentence, and those that choose not to will be dealt with accordingly.

"I also would urge those who know they are wanted to come forward and give themselves up so they can start the New Year with a clean slate."

• Details of those wanted by Lancashire Constabulary are put on the Wanted section of the force website www.lancashire.police.uk
Posted by John Freeman at 13:24 No comments: 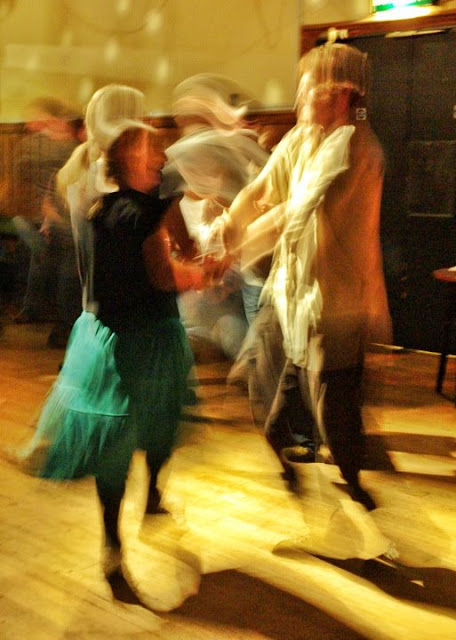 Revellers enjoying the Free Reed Band at a ceilidh at the Gregson. Photo by Barrie Marshall

Posted by John Freeman at 09:15 No comments: 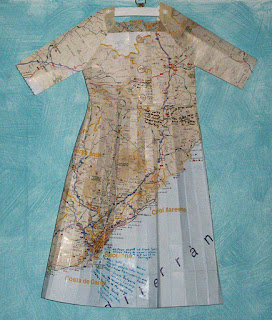 Local theatre and cinema The Dukes has mapped out how it will commemorate Holocaust Memorial Day on 27th January 2012, with events that include an exhibtion by local artist Catriona Stamp.

Holocaust Memorial Day, which has run in the UK since 2001, provides an opportunity for everyone to learn lessons from the Holocaust, Nazi persecution and subsequent genocides and apply them to the present day to create a safer, better future. It's an opportunity to share the memory of the millions who were murdered in the Holocaust by the Nazis last century and subsequent genocides in Cambodia, Rwanda, Bosnia and Darfur in order to challenge hatred and persecution in the UK today.

This year, national organisers of the Day are asking people to consider what you see and hear around you, and to use your voices to speak up against hatred and discrimination. As part of that, they're inviting people to put pen to paper to create an original piece of poetry that reflects this year’s theme, Speak Up, Speak Out, which can be showcased at the UK event in January and on the HMD website.

At The Dukes, a special exhibition will be staged in the gallery from 9th - 30th January  and on 18th January , the cinema screens a film to coincide with this year’s theme.

Entitled (Dis)Placement the exhibition is by Lancaster-based artist Catriona Stamp who has been involved with the city’s commemoration of Holocaust Memorial Day for 10 years.

A former Lancaster city councillor, Catriona has transformed maps into clothes as she explores how the intimate surroundings of place and clothing can affect and reflect identity with particular reference to Jewish heritage.

The resulting clothes will hang, as if on a line, empty of their owner.

Catriona collected European maps bought from a stall in Lancaster and from Carnforth Bookshop for the exhibtion, while others just arrived on her doorstep.

Catriona, who has also worked as a therapist and is interested in how people cope with trauma such as that experienced during the Holocaust and its aftermath says the use of maps for the clothes is intended to set up an initial enquiry in the viewers mind about the relationship between identity and place, asking the question – how rooted is anyone?

Catriona has had the idea of creating art from maps for a while – perhaps unsurprisingly, given that her first degree was in geography. She later took an art MA at the University of Central Lancashire and became a practising artist in the 1990s.

The exhibition text, following the roads or waterways, concerns both the culture and history of Jewish occupation, and eviction, since the 1400s to the present day.

Other events marking HMD include a screening of Oranges & Sunshine, which is being screened on 18th January. Directed by Jim Loach and starring Emily Watson, it tells the disturbing story of a social worker fighting for justice for a generation of children removed from their families, many settling in Australia.


On 26th January, young people from DT3, The Dukes youth specific space, will take part in a candlelight commemoration and celebration at Lancaster Town Hall from 6.30pm alongside NCBI Lancashire and More Music.

Students from Lytham St Anne’s College, a trust partner of The Dukes, will present a performance based on their recent visit to Auschwitz.

Young people involved in DT3’S Wireless Project plan to interview people at the event for a Diversity FM radio show in February.

• (Dis)Placement runs from January 9-30 at The Dukes gallery which is open from 10am to 11pm, Monday to Saturday.  Please call the box office on 01524 598500 to check opening times if you’re making a special journey as occasionally the space is closed to the public.


• To enter the national Holocaust Memorial Day poetry contest, email your poem (no more than) 200 words to artsAThmd.org.uk by noon on Wednesday 18th January 2012. In the subject line, write poetry competition. Please include your name, date of birth and contact telephone number in the body of the email. Full terms and conditions are on the HMD website.

Posted by John Freeman at 14:27 No comments:

Lancaster University's Indian Society has contributed £500 toward the cost of returning the body of shot student Anuj Bidve to India.

The 23-year-old Lancaster University postgraduate student was shot dead in Salford on Boxing Day as he walked with friends near their hotel.

Four people, including two teenagers aged 16 and 17, have been arrested in connection with the shooting.

Hailing from Pune, India, Anuj was studying Microelectronics at Lancaster University. His father, Subhash Bidve, has appealed for help to bring his body back to Pune through Facebook.

A number of peace events are being planned to commemorate Anuj's life, including one in Mumbai and one in Salfor on Monday 2nd January.

In a statement, Mr Bidve’s family said: ‘Anuj was a loving son, a super caring brother and first and forever friend for many. He valued his relationships and put them over anything else. He was the first person you could call when in trouble. He could easily bring a smile on anyone’s face with his innocent jokes.

"Anuj loved to travel and loved his food. He loved to cook. He loved playing football. He enjoyed his life and is an inspiration for us to live life to its fullest.

"His passing will not only leave a void in our lives, but in the hearts of all those who knew him."

Despite the shocking event, authorities and University contacts of are anxious to point out that such attacks are very rare. Greater Manchester Police have said there is no evidence, as yet, to suggest the attack was either racially motivated or gang related.

"This act should not cause us to worry about sending kids or relatives to study or work in England or Lancaster University... We have trust that justice shall prevail.

"Lancaster University Indian Society has decided to contribute £500 right now and more funds will be given as and when required."

Goodbye to The BFG

There’s just a few days left before The BFG strides out of Lancaster and returns to Giant Country.

The Dukes 40th annual Christmas show – The BFG -  draws to an end on 7th January after a six week festive run.

Roald Dahl’s classic story itself reaches a milestone in 2012, the 30th anniversary of its publication. It was inspired by Dahl’s granddaughter Sophie, who went on to become a world famous model and TV presenter.

In a faithful adaptation of this most scrumdiddlyumptious story, The Dukes tells this heartwarming tale of friendship and bravery with a cast of new and familiar actors to the Lancaster theatre alongside amazing puppetry. Masses of fun and plenty of surprises are promised along the way.

Email ThisBlogThis!Share to TwitterShare to FacebookShare to Pinterest
Labels: The Dukes

Posted by John Freeman at 08:52 No comments: