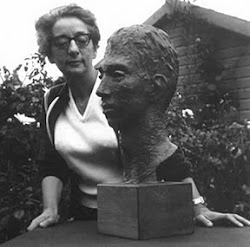 The work of the late Glasgow Jewish artist Hannah Frank is forms the first exhibition at Lancaster’s Gallery 23 for 2012, running until 25th March.

There has been a huge resurgence of interest in Hannah Frank’s work over the recent years, largely due to the efforts of Hannah’s niece, Lancaster-based Fiona Frank.

“I met Arteria with Gallery 23 proprietor, Jane Richardson, when I went into the impressive Lancaster shop on Brock Street last July," says Fiona. "I showed her our new Hannah Frank leaflet and new range of cards we'd had made for the Harrogate Home & Gift Fair. I was delighted to hear that she was going to be at the Gift Fair too and we met up again there. The idea of the exhibition grew out of these meetings.

" Jane had the idea of producing Hannah Frank notelets, packs of six Hannah Frank images on smaller cards to complement the larger, frameable single cards that Hannah herself had printed. Jane clearly has an eye for providing what people want because the notelets have proved very popular with the public.”

The work of Hannah Frank has enjoyed a strong following in the Lancaster area. A large exhibition of her drawings and sculptures appeared at Lancaster City Art Gallery and Museum in 2004 and Lancaster University’s Peter Scott gallery started the interest well before that. The Peter Scott Gallery owns one of Hannah Frank’s bronze sculptures and several people in Lancaster took the opportunity of purchasing sculptures at that exhibition. The Gregson Arts and Community Centre have run two exhibitions of Hannah Frank prints and many Gregson customers bought reproduction prints during those shows.

Fiona added: “Children at Central Lancaster High school have taken part in Hannah Frank print workshops with local artists and local shops have stocked Hannah Frank cards. However, this will be the first time that a Lancaster venue will show Hannah Frank framed cards and have the notelets on sale; and two bronze sculptures will also be available to view and to buy.”

Jane Richardson, said: “To have the work of such a credible and prolific artist is truly inspiring for us as a gallery and we have no doubt that visitors will find her collection both intriguing and enchanting. We hold a lot of respect for Hannah and, indeed, her niece Fiona, who is working so hard to keep her legacy alive.”

Hannah was born in 1908 in Glasgow’s Gorbals. She studied at GlasgowUniversity, graduating with an MA in English and Latin in 1930. She also attended evening classes at the world-famous Glasgow School of Art from the 1920s onwards. She produced her distinctive black and white drawings from the 1920s. The GlasgowUniversity magazine rarely came out without a drawing by ‘Al Aaraaf’, Hannah’s pen name. During the 1930s Hannah’s drawings had a dark, haunting quality; after her marriage in 1939 they became exuberant, filled with light, using much white space.

In 1952 Hannah turned to sculpture, studying under BennoSchotz, who became Her Majesty's Sculptor in Ordinary for Scotland.Hannah’s drawings and sculptures have been exhibited in the Royal Glasgow Institute, the Royal Academy, and the Royal Scottish Academy.

In the years leading up to Hannah Frank’s centenary a five year international tour of Hannah’s work took her art across the UK, to the United States, culminating in a full Hannah Frank retrospective exhibition at Glasgow University. This opened on the artist’s 100th birthday, 23 August 2008, and Hannah herself attended the preview where she received a standing ovation.