Freeman's Wood: Can it be saved? 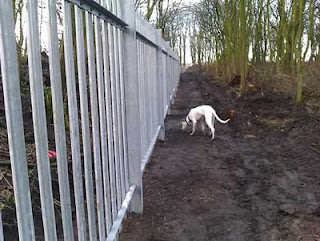 Shocked by the erection of a large metal fence around Freeman's Wood in Lancaster, campaigners trying to save the land for the public are urging human users of the wood to take action by backing the Council's Tree Preservation Orders (TPOs) there.

As we reported last month, Lancastrians have reacted angrily to the news that Freeman's Wood near the Lune Industrial Estate - long open to the public and popular with walkers, bikers and bird watchers - has been fenced off by  landowners The Property Trust, a Bermuda-based company headed by a Hong Kong businessman, who have lodged an objection against the TPO.

Local councillor Jon Barry is one of several now organising a campagn to prevent any development, and has appealed for proof that former landowners, Willamson's, who used the land as a tip, gave the land to the people of the Marsh estate.

One option - although one tried in other areas with mixed results - is to give support to the Council's Tree Preservation Orders on the Freeman's Wood woodland, which were granted just after the fence went up.

This is vitally important if locals want to save the site as woodland as, otherwise, the owners can simply clear it and destroy all the habitat in one foul swoop.

If you know this area, campaigners are appealing to users to please write in and say that you support the TPO order:

"For example, individuals or groups may wish to express their support detailing how they use the area in general, what they 'feel' about the woodland and the value and enjoyment that they believe it brings to the locality.

"Wildlife value is obviously important, and should be mentioned if that is what is believed to be the case. However, TPOs are served with amenity value and the enjoyment of the public in mind.

"Visual appearance, greening, screening, character of an area, potential longevity, scarcity, or rarity are all factors that may apply in any given situation; wildlife value is 'an also ran' if you will, it cannot be a sole reason for serving a TPO, though it is a wider consideration."

• You should address your email or letter to Maxine Knagg, Tree Officer, Lancaster City Council. Send your email to mknagg@lancaster.gov.uk and head it TPO 496 (2011)
Posted by John Freeman at 13:15

The fence is a hideous barrier, blatantly disregarding the Lancaster people who have enjoyed this woodland for generations. I have tried to convey its brutality in these photographs. http://www.flickr.com/photos/16609214@N05/sets/72157629234763352/