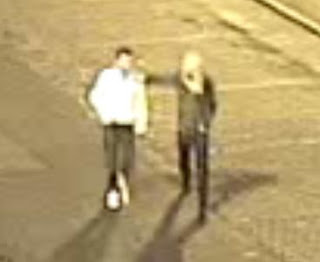 Police have issued CCTV images of two men they want to trace after a man was assaulted as he walked home in Lancaster on Christmas Eve.

The incident took place around 5.00am on 24th December 2011 when the 21-year-old victim was walking home along St Leonards Gate talking on his mobile phone after a night out with friends.

He heard a group of people arguing and one of the men then approached him and punched him in the mouth causing him to fall to the floor, where he was kicked by both men causing him minor injuries.

PC Matt Butcher from Lancaster Police said: “This was a completely unprovoked assault and fortunately the victim was not seriously hurt.

“I am keen to trace the two men pictured in the CCTV images but would stress that these men were captured on CCTV in the area around the time of the office and may not be involved but they could be key witnesses. 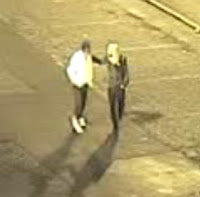 “I would urge anybody that thinks they recognise these men or with any information about this incident that could assist us with our investigation to come forward and contact police.”

The main offender is described as white, aged in his early 20s with short, dark brown hair. He was wearing a light chequered shirt with dark jeans.

People with information can also contact the independent charity Crimestoppers anonymously on 0800 555 111 or on-line at Crimestoppers-uk.org. No personal details are taken, information is not traced or recorded and you will not go to court.
Posted by John Freeman at 12:31