In Review: Romeo and Juliet 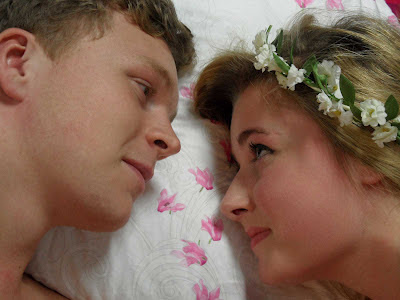 Romeo and Juliet is probably a play best performed by teenagers. Or so I was convinced after watching the opening night of the Lancaster Girls’ Grammar School/Lancaster Royal Grammar School production. It’s also even better if the sexes are nicely balanced in the Montague and Capulet gangs, and in Helen Tozer’s production and adaptation they are. Set broadly in the present day and on an ocean liner, The Verona, this production has links with the films West Side Story, Baz Luhrmann’s Romeo and Juliet and even Titanic (which itself can be seen as drawing on Shakespeare’s play).

This production is very imaginative, interestingly featuring two female friars (Rhona Egerton and Shona Taylor). There is a very funny juxtaposition of Romeo and Juliet’s only night together, on one side of the stage, with Juliet’s parents and Paris planning Juliet’s marriage to Paris on the other – and at this point we welcome this bit of lightheartedness. It is also full of energy, vibrant, intense, very moving and more besides. The acting is excellent, with a thoroughly natural and convincing feel. Ruby Henderson shines as Juliet, whom she plays as a girlish thirteen-year-old who grows up very, very quickly. Charlie Robb is a sensitive, uncompromising and driven Romeo. Between them they allow us to experience something of the anguish this young couple would have gone through.

Daisy Whalley and Ruaidhri Johnstone, Juliet’s seemingly ill-matched Capulet parents, who see nothing wrong with marrying their daughter off to a man she doesn’t love, nor with disowning her if she does not obey, create a pleasing dynamic, acting in opposition and coming together by turn. Milli Blackwell’s Nurse is genuinely comedic at first – but then is tragically played when events take their much darker turn. 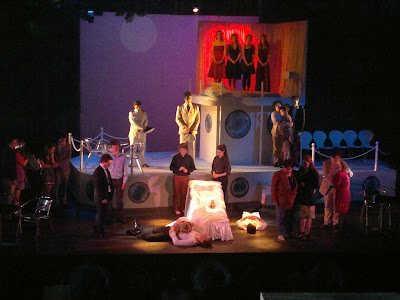 The play is further enriched by Andy Whitfield’s several musical compositions and adaptations, and the contribution of musicians and singers from both schools, including from the LGGS junior choir who sing at Romeo and Juliet’s marriage and later while Juliet lies ‘dead’ in the vault. The fight director Martin Shenton did a brilliant job too: there is nothing amateur or half-hearted in any of the fights, to the extent that the struggle at the end between Paris (Harry Cole) and Romeo was something of a show-stealer.

Because of the cultural over-familiarity of some of the lines, and its emotional intensity, Romeo and Juliet done badly can be a theatrical disaster, and is an ambitious project for any amateur company or as a school production. Done well, however, heightened as an experience by the dramatic irony, it is unbearably sad and deeply moving. This production was a tour de force. Congratulations to all concerned.

Posted by Jane Sunderland at 23:15