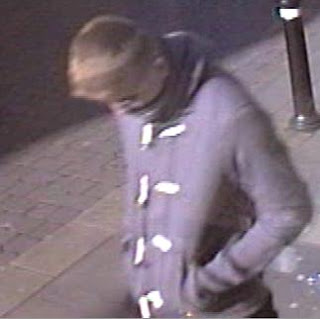 Detectives believe that a second man may have been involved in the incident and it is thought that the two men were together in the city centre prior to the robbery taking place.

It was lunchtime at around 12.00pm when a man entered the premises and threatened the assistant with a gun and demanded money.

A CCTV image of the man was released, who is described as being white, around 5ft 10inc tall with a pale complexion and was clean shaven. He had blond/red hair and a local accent.

He was wearing a grey silver hooded cardigan with distinctive toggle style fastening akin to a duffle coat, dark tracksuit bottoms, grey gloves, and a black/grey scarf and was wearing sunglasses. 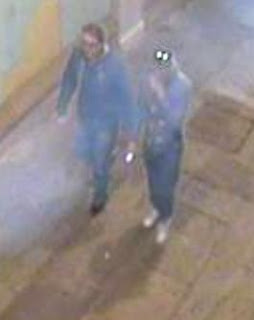 A number of enquiries have been carried out and officers have identified another man who they would like to speak to in connection with this offence. CCTV images have been released and they are asking the public to see if they recognise him.

He is described as being white, in his mid to late twenties and approximately 5ft 6inc tall with a medium build and dark sandy orange coloured short hair. He was also wearing gold rimmed glasses of an aviator size.

It is believed that he was wearing a light coloured grey jacket similar to a suit jacket.

Following the robbery, it is thought the two men could have travelled to the Marine Road area of Morecambe, close to the Gala Bingo.

Detective Inspector Phil Jones said, “We are pursuing a number of positive lines of enquiry but are obviously keen to trace the two men who feature in the CCTV as we believe they could assist our enquiry.

“I would appeal to anyone who was in the city centre on the morning of Thursday 29th March and who may have seen anyone acting suspiciously to come forward and contact the police.

“Although not physically hurt, the victims have been left distressed by the incident and are coming to terms with what has happened. I would like to reassure the community that incidents such as these are very rare and we have a team of detectives working on this investigation.” 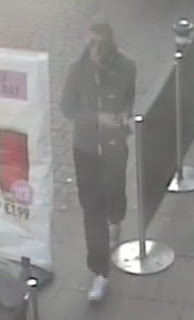 Anyone with information is asked to call Lancaster CID on 101.

People with information can also contact the independent charity Crimestoppers anonymously on 0800 555 111 or on-line at Crimestoppers-uk.org. No personal details are taken, information is not traced or recorded and you will not go to court.
Posted by John Freeman at 16:05