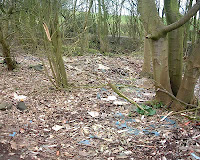 Lancaster City Council has responded to concerns Virtual Lancaster raised about possible exposure of material contaminated by asbestos at the Freeman's Wood site, an historic landfill site owned by Bermuda-registered company The Property Trust Group and recently part-excavated by a private company. The council's  response also addresses concerns raised about the extent of waste that has recently been strewn outside the site, on public footpaths and their verges.

All photos with this article were taken just outside the site perimeter in March 2012.

"During a recent visit to the site by the council's Contaminated Land Officer, a relatively small quantity of made ground / waste materials were noted in close proximity to a recently constructed galvanised palisade fence.  These materials appeared to have been disturbed during the construction of the fence. 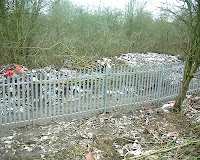 "The materials were visually inspected and there was no evidence of any risk to public health, including no sign of fibrous materials at the surface.

"It is not within the council's powers to take any further action at this time.  However, should the council receive a planning application from the landowner to develop the site in the future, it will have a duty and responsibility as local planning authority to assess any risks relating to land contamination as part of the planning process."

Local residents will doubtless be greatly reassured by this statement from the City Council. However it does seem as if the Council is exercising a great deal of discretion in its dealings with  this multi-million dollar offshore development company. 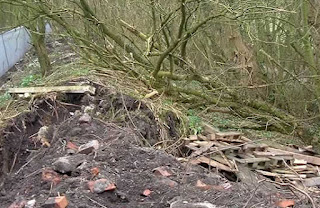 As part of a crackdown in June 2010 by Lancaster City Council, 75 people were issued with £80 fixed penalty notices for dropping cigarette butts and litter in the Lancaster district (read report).

In December 2009 a Morecambe woman pleaded guilty to three charges, brought by the City Council,  of flytipping in a quiet Lancaster lane (read report)  Although she claimed to have paid a private contractor to remove waste from her premises, she was fined £400 and ordered to pay £300 costs and £15 victim surcharge for failing in her duty of care.

“The council is committed to maintaining the cleanliness of our district," commented Lancaster City Council’s Coun Jon Barry, back in 2009. "Whether it's a case like this, or someone dumping a single bin bag in a back street, fly tipping is something that spoils the appearance of the area. Once a fly tip is identified it then has to be cleaned up and investigated, all of which creates a cost to the council tax payer."

Virtual Lancaster has contacted the Environment Agency regarding the exposure and scattering of historic landfill material and their response is expected in due course. According to their website listing for the site it contains 'Waste that has hazardous properties and is defined in the Special Waste Regulations 1996.'
Posted by Chris Satori at 19:12

Perhaps I am mis-reading this, but it sems to me that the Council haven't actually been on site, just looked at the crap that has 'seeped' through the fence?

Don't they have the power to inspect this potentialy dangerous sie, even if it is on private land?

It's difficult to inspect anything when you are looking the other way as hard as you can.