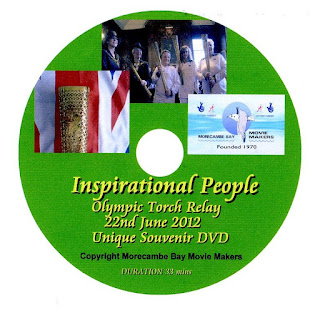 It kept raining, they kept shooting! Despite what were often adverse conditions, an intrepid team of local film makers persevered in their recording of the Olympic Torch's passage through the Lancaster and Morecambe area - and now a souvenir video of the Relay is available.

On 22nd June, a team of 14 fourteen volunteer camera people from Morecambe Bay Movie Makers were there to record the Olympic Torch Relay as it passed through Lancaster and Morecambe for posterity. In the worst weather possible – the rain was torrential and the wind howled all day! – they leapfrogged the route to capture most of the torchbearers and the thousands of local people and schoolchildren who, despite the downpours, turned out to cheer the torch bearers as they travelled from Carnforth to Lancaster.

All the torch bearers had earned the right to take part in the event through their service to their communities, and that is why the DVD is called Inspirational People.

Scripted, edited and narrated by local award-winning heritage film director Chris Abram, the 33-minute DVD contains interviews with many of the torchbearers and the Mayor of Lancaster and captures the spirit of the local community on this very special day.

Morecambe Bay Movie Makers undertook this as a service to their community and a copy of the film is being lodged with the North West Film Archive in Manchester for generations to come. It is hoped that it will also raise a small amount towards the club funds.

The DVD is the only comprehensive video of this event and the team say every family should have a copy in their family photograph drawer.

• Priced at only £7 the DVD is available direct from: The Secretary, Morecambe Movie Makers, 15 Pembroke Avenue, Morecambe LA4 6EY, Tel:01524 416074. (Plus £3 P&P for up to three copies if needed to be posted). Or buy it direct from Lancaster and Morecambe Visitor Information Centres, or Carnforth Bookshop.
Posted by John Freeman at 17:08