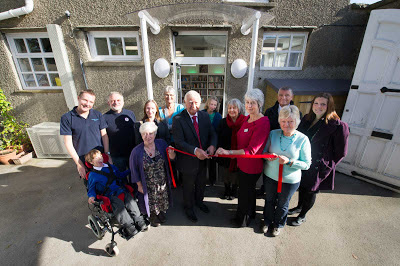 Good news for once for the beleagured library service today, as improved community facilities and up-to-date technology were on show at an event to mark the official reopening of Silverdale Library.

The £128,000 makeover includes a full refurbishment of the inside of the building, a new main entrance with automatic doors, which has been moved to the side of the building to improve accessibility; an extra public-access computer and a large plasma screen.

The Library now boasts improved lighting and heating, Wi-Fi to enable customers can use their own laptops and an outdoor area with decking so customers can read outside and hold story time events and other activities

These refurbishments are part of Lancashire County Council's Regenerate scheme, a £5.5m programme which has seen a complete renovation of 15 libraries with more to come.

"The outdated fixtures and fittings have been removed and replaced to create a modern, welcoming library," commmneted Mr Smith, lead member for community services.

"The way we use libraries has changed and the new-look Silverdale Library is an even better place to read, use the internet, or attend community events.

"Since the library reopened in December 2011 public use of the PC network has increased by 50% and we're pleased that the library is allowing even more people to access the internet.

"Silverdale Library is very much at the heart of the local community and after speaking to local residents, we're pleased that they are so positive about the work we've done."

Although there were library closures in 2011, in Lancashire Public Library News reports there have been a number of service extensions and upgrades to services in 2012, including 24 branches to be open from 9am rather than 9.30am , further upgrading of Accrington, Harris (Preston), Bacup, St Annes and Earby libraries, a £1m upgrading for Earby and Rosegrove libraries.

However, there have been increases in charges, volunteers used to extend hours in some branches. In April, the Lancashire Telegraph reported earlier this year that the libraries budget had been cut from £22m p.a. 2009/10 to £17.1m 2012/13
Posted by John Freeman at 16:20