First Friday brings young to the fore in December

Young people will be to the fore at the next First Friday arts event in Lancaster on 7th December – and for the first time since First Fridays were launched in October, events will run throughout the district as well as in Lancaster city centre.

There’ll be a musical start to events with Rock The Square from 4.30-6.30pm when young singers and bands from DT3 in Lancaster and More Music in Morecambe will perform for free in Market Square.

From 6.30-7.30pm, celebrate the 10th anniversary of Ludus Youth Dance Company with a Youth Dance Triple Bill at Ludus Dance Studio in King Street. This free event will be a showcase of work by an inspiring group of dancers aged 14-19 who are auditioned annually.

If drama and adventure are what you’re after, there’s a performance of Treasure Island at The Dukes at 7.00pm.The show is ticketed but there will be free music in the bar before the good ship Hispaniola sets sail. 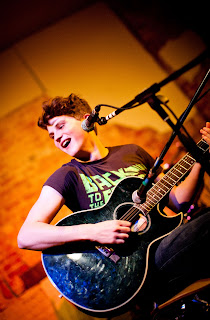 There’ll also be two First Friday events to enjoy outside of Lancaster on 7th December.

There’s a free return bus from Lancaster to The Hothouse in Morecambe to see the Stages Live gig which runs from 7-10.30pm. Rae Morris, the teenage singer-songwriter who has just been signed to Atlantic Records, will be headlining the only UK gig on her European tour, and she will be supported by the district’s very own Katy Pickles. For more information about the free bus and to book tickets for this gig, ring 01524 831997.

And if you fancy a trip out in to the Lune Valley to celebrate the achievements of young and aspiring artists from the district and beyond, Green Close Studios in Melling is hosting the 1625 launch which is a free event from 7.30pm.

First Fridays have been taking place since October and are organised to promote Lancaster Arts City. Every First Friday of the month, Lancaster Arts Partners aim to offer a range of mainly free events encouraging residents and visitors alike to see the area afresh and try out something new on the arts scene.

There’s also a new Lancaster Arts City free app which can be downloaded by registering at www.artscity.co.uk. The app is simple to use and includes helpful search features and a map featuring all the participating venues such as Lancaster’s Grand Theatre and The Platform in Morecambe.

• For more information on Lancaster Arts City, First Fridays and the free app, visit www.artscity.co.uk
Posted by John Freeman at 17:19