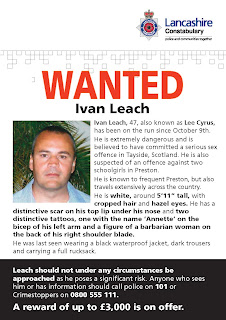 A senior Lancashire detective has today reassured the public that the police are doing all that they can to catch fugitive Ivan Leach.

Police forces across England and Scotland are working together in an effort to track down the 47-year-old absconder.

Posters have been distributed across England and Scotland appearing on buses, in shops, community centres, hospitals, and in bus and train stations. The appeal will be shown on the big screen at Preston North End’s cup game tomorrow (Saturday 3rd November) and we are working with other football clubs across England and Scotland to widen the appeal via their match programmes.

Detective Superintendent Paul Withers from the Force Major Investigation Team said, “I want to reassure the public that we are doing everything that we can to locate Ivan Leach and are working closely with other police forces across the country.

“We have a large team of highly trained detectives and police staff responding to reported sightings in our area including officers from our Mounted Branch. Officers are trawling through hours of CCTV footage to see if he has been captured on camera, and speaking to his known associates.”

The last reported sighting of Ivan Leach was in Nottingham city centre on the 20th of October however forces across the UK have received over 100 possible sightings since he went missing.

Leach was born in Preston and has connections across the city as well as in South Ribble.

He is known to have been in the city on a number of occasions since he absconded, but he could be anywhere in the country. Enquiries are also ongoing in Nottinghamshire, Lincolnshire and Tayside.

Officers have warned Leach should not, under any circumstances, be approached as he poses a significant risk. He is believed to have carried out a very serious sexual attack in Tayside, Scotland, since he absconded on October 9th, although further details cannot be released for legal reasons.

Detective Superintendent Withers continued; “We are liaising with a number of other forces across England and Scotland and have a huge number of resources dedicated to tracking him down and apprehend him but we need the public’s help.

“I want to reassure people that we follow up every potential sighting of him so I’d urge people to call police if you think you see him or know of his current whereabouts.

“I would also like to warn anyone who may be harbouring him that if they know where he is, and they fail to notify police, action will be taken against them.

‘‘At the same time I would appeal directly to Leach, wherever he is, to hand himself in. Police forces across the UK are alert to the fact that has absconded and given the publicity of the past two weeks, his face is now well known within communities across England and Scotland. He should do the right thing and give himself up.’’

Leach is described as white; around five feet 11 inches tall, of stocky build with cropped hair and hazel eyes. His has a distinctive scar on his top lip under his nose and two distinctive tattoos, one with the name ‘Annette’ on the bicep of his left arm and a figure of a barbarian woman on the back of his right shoulder blade.

Anyone with any information in England is asked to contact police by calling 101 if in Scotland, people are asked to call 999 (the 101 service is not yet available in Scotland)

People with information can also contact the independent charity Crimestoppers anonymously on 0800 555 111 or on-line at Crimestoppers-uk.org. No personal details are taken, information is not traced or recorded and you will not go to court.
Posted by John Freeman at 14:37