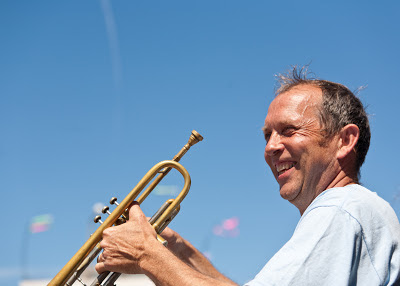 A Morecambe musician will be spending 24 hours in a tower broadcasting live to the world, thousands of miles from home.

Pete Moser, artistic director of More Music, will spend a 24-hour residency at the top of the Arts Faculty Tower at Hong Kong University on 12th November.

From 6.00am GMT, every hour he will create and perform a new song and broadcast it live to the world and at different times of the day and night he will be visited by a variety of musicians who will jam alongside him.

You will be able to follow this marathon via links on www.moremusic.org.uk or go to www.24hoursinatower.com. And if you want to send him ideas for the new songs – use facebook (pete moser) or twitter (@petemoser).

This project is similar to one commissioned  by Live at Lica’s Curate the Campus in 2011 when Pete spent 24 hours writing, performing and broadcasting from the top of Lancaster University's Bowland Tower.

More Music has been developing in China since 2006.This work began as a response to the Morecambe Bay tragedy of February 2004 when 23 Chinese workers lost their lives at sea.

During November, Pete will run workshops, perform and research the music and culture of Hong Kong and China.

In Macau, Pete’s one-man band will take part in the opening parade of the Macau Festival and in Hong Kong, a training event and shows will complete a six month songwriting project, Hong Kong Tales.

In Xiamen, new partnerships will be developed with funding from the British Council Connections through Culture scheme.

The whole journey will be documented as always in a blog on the site www.thelongwalk.info. Over the past eight years, more than 140 blog posts tell the story of this remarkable journey.

More Music is a community music and education charity based at the Hothouse in the West End of Morecambe, delivering workshops training, performances and festivals both in the UK and abroad.

Since 2004, when 23 Chinese cocklepickers died in the Morecambe Bay tragedy, More Music has developed a link with China and Hong Kong which began with four major community music projects involving hundreds of people in Morecambe, Liverpool, Gateshead and Hong Kong.

A result of the work in Hong Kong has been the development of a community music network with the Centre for Cultural Development.

More Music has been involved with two major projects in Hong Kong and Shanghai as well as many workshops and sessions across Eastern China. It is currently starting to build a further five years work in Hong Kong and along the coast of Fuijan Province.
Posted by John Freeman at 15:55