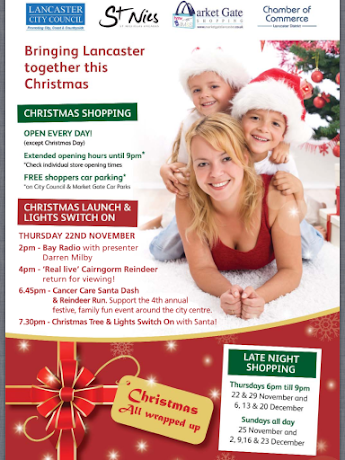 After a couple of years without their crowd-pulling attraction, Lancaster's retailers have decided to bring back Santa's reindeer as part of their Christmas Lights switch on later this month.

On Thursday 22nd November Santa's reindeer will be on view in Market Square, once again arriving courtesy of The Cairngorm Reindeer Herd (who of course work with Santa on a regular basis).

The reindeer won't be used in a procession as they have in past years, because the success of those appearances in terms of bringing in enthusiastic shoppers wanting to see them raised some safety concerns.

"We aren't doing the procession, simply displaying them from mid-afternoon until the lights switch-on at 7.30," St. Nicholas Arcades boss Jerry North told virtual-lancaster.

"I've had my arm twisted this year to get them back," he reveals. "I think the fact that they are there for some time will mean that more kiddies will get to see them and certainly in less of a crush than previously."

The switch on events also include the increasingly popular Santa Dash event and other activities in the lead up to the evening switch on.

Hi,
Thanks for the information about this Really nice Post.