The Really Heavy Greatcoat Review of the Year 2012 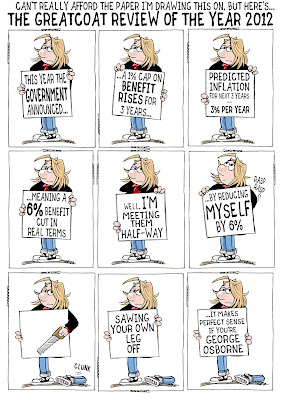 The Really Heavy Greatcoat by myself and Lancaster-based artist Nick Miller was published fairly regularly for about 20 years, last featuring in the comics news magazine Comics International in 2009. The strip was published for many years in alternative Lancaster titles such as On The Beat and Off the Beat and online on downthetubes.net and virtual-lancaster.net.


If anyone ever offered to pay us to write it, it might still be running today - but Nick still creates an annual Review of the Year, bless him!

• More by Nick at: http://teamsputnikblog.blogspot.com