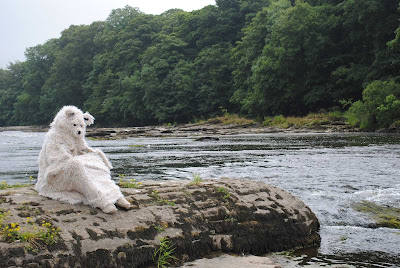 Residents living by the River Lune at Halton were amazed earlier this month to see a polar bear sitting on a rock by the water's edge.

Several people living at Forgebank, whose homes over look the river, had sightings of the solitary bear.

“She seemed distressed, as though she wanted to get away from here,” according to resident Alison Cahn. “She appeared to be trying to put on snorkeling gear, and was struggling with the mask. It seemed a bit peculiar.”

Another resident, Becky James, was paddling her kayak downstream when she spotted the bear.  “She had her paw stuck out: I think she was trying to hitch a lift,” Miss James explained. “There was no way I was going to stop - I paddled off double quick.”

The mystery was solved a few days later when a film appeared on Youtube, featuring “Scuba Bear”. It was all a ploy to highlight the arrival of Lancashire's newest eco enterprise hub - providing low carbon office, studio, hot-desk and workshop space - which opens in Halton Mill at the start of September.

“I wanted to find a lighthearted way to make a serious point about the impact our current way of working is having on the environment and on the habitat of animals like the polar bear,” said Daniel Wigmore-Shepherd, an intern working for Green Elephant, which is managing the new workspace.

Halton Mill, part of the former Luneside Engineering Works, has been eco renovated to create an energy efficient building, already awarded the top “A” rating Energy Performance Certificate. Electricity comes from solar panels on the roof, and from a green energy supplier. From next year it should be supplied by a micro hydro scheme on a nearby weir.  Heating is provided by a bio-mass boiler using local wood chip, which also supplies the Lancaster Cohousing community next door.

“We aim to minimise the impact of our work activities and to support our tenants to reduce the impact of theirs,” said Miss Cahn, who is a director of Green Elephant. “We have lots of expertise amongst already committed tenants, and want to share facilities, resources and ideas to help us do this.”

“If we all take this philosophy our bear may have somewhere to go back to,” Mr Wigmore-Shepherd said. “Until then kayakers, canoeists and anglers beware.”

• View Scuba Bear on film on YouTube or watch it on the Halton Mill website www.haltonmill.org.uk
Posted by John Freeman at 13:48