The programme's in place, the venues booked. Now, comic creators from across the North West - including Lancaster and Morecambe - are getting ready for one of the biggest comic events of the year in October - the Lakes International Comic Art Festival.

Britain is buzzing with comics festivals and conventions up and down the land and throughout the year. Across the spectrum of scale and longevity, Oxford’s determinedly human-scale small press weekend Caption is the longest one still running, while the MCM Expos can draw humungous hordes of fans, though not necessarily of comics. The term ‘Comicon’ has become rather debased lately worldwide, sidelining comics and standing more for fantasy and genre movies, TV, games and pop culture in general. Other festivals like Thought Bubble in Leeds and Comica in London, both bouncing back this autumn, put the emphasis firmly on the richness of comics.

This year is buzzier than ever, what with newcomers Nerd Fest in Nottingham and 22 Panels in Falmouth, Cornwall and the Edinburgh Book Festival running a big comics programme Stripped. But the most exciting premier is the Lakes International Comic Art Festival over the weekend of 18th - 20th October, which long time comics ambassdaor Paul Gravett – who has run events across the UK for over 25 years – feels is set to make the lovely Cumbrian town of Kendal world-famous for more than just the glorious Lake District scenery and scrummy Mint Cake.

The plans for its first year are audaciously ambitious and, in an interview here with Paul, its director Julie Tait brims over with vivacity and vision.

Lancaster-based comic creators expected to be at the Festival include comics writer Andy Diggle, artist Sean Phillips (who also has an exhibition of his work there), Paul Harrison-Davies and comics editor and former editor of Doctor Who Magazine John Freeman.

"Comic art has always been an interest and my 15 year old son has intensified this for me over the last few years so it has become a shared interest," says Julie, who has been working in the arts for nearly 25 years. "We have been to a wide range of conventions and events together. He has Asperger’s Syndrome so our experiences have been a little unusual too - another longer story.

"I have seen the parallels between outdoor arts and comic art and feel there is huge potential to reach a wider audience and so much amazing work going on - innovative and of the highest quality. Call it zeitgeist. The four-year Olympic programme, Lakes Alive, which I have been working on has come to an end (of course!) and whist there is a legacy, it is smaller scale now. So this leaves some room for new ventures. Plus there is no major event in the North West celebrating comic art and where better to put on a true cultural festival about this medium than the Lakes?

"...The Town and District Councils are hugely supportive as are the Library Service (county-wide), schools and colleges - all critical to success too," she continues, asked about local support for her ambitious project which will see over 80 comic creators on various stages and in numerous venues, along with an increasing number of publishers and editorial teams, such as Titan Comics and The Phoenix. "Most importantly, more and more businesses are coming out of the woodwork with their own ideas of how to support it, and the local population, whilst not quite sure what it all entails, are becoming increasingly curious and then excited because it offers a new kind of event..." 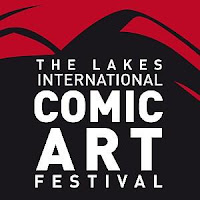 While Julie is no doubt deligted that the event is being compared in its style to the prestigious French comics festival put on in Angouleme each January, which attracts over 100,000 visitors to the small French city, she is also realistic about what can be acheived in the show's first year.

"Reality check first, which I already knew about from my travels to French street arts festivals," she cautions. "The Europeans get it, really value culture and have big budgets (still) and are embedded in their towns and cities  - huge envy! Then the excitement about making it happen on no budget from a standing start but with a great place and local energy to build on.

"To be honest that is the nub of it - the individual aspects were what I had expected and cheekily I even had ideas for how they could improve their festival 'offer'! The most inspiring bit was the scale and the breadth and depth of its impact  - lots and lots of people and from all backgrounds reveling in comic art with displays in shop windows and streets feeling alive with it all...

"...The events programme represents a wide range of genres etc and a reasonable international representation too. Much to build on in the future. At the same time we have areas which are totally free and less “earnest” in presentation to attract those new to it all. However quality is the connecting factor I hope."

With the project looming ever closer, there's no stopping now, and Julie's enthusiasm for the whole Festival is apparent throughout her interview, even touching on advance planning for 2014, with meetings and ideas already flowing for next year's event. She's keen to  ensure guests this year go away and advocate for what the Festival team are doing, "private sectors come to the table to support in year two and the public sector and tourism industries here see the benefits and want to help sustain it.

"If we can put down enough markers this year, I think we have a great future potentially..."

• Read the full interview on Paul Gravett's web site here. Paul will be hosting several of the panels at the event, interviewing Ed Brubaker and Kurt Busiek, among others

• Book event tickets and find out more about the Lakes International Comic Art Festival on the official web site
Posted by John Freeman at 16:11