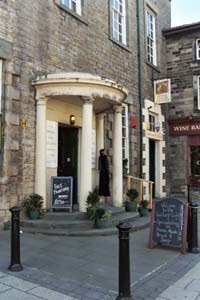 (Updated): The future of the trading area in Lancaster’s historic Assembly Rooms will be discussed by the city council’s Cabinet on Tuesday 5th November, with plans on the table to turn it into a tea room and ditch its unique but poorly managed "Collectors' Market" identity.

The ground floor of this 18th Century Grade 2 listed building on King Street in Lancaster currently acts as a market trading hall selling what the Council describes as an "eclectic" mix of items.

The building was originally used as a social space for Alms House residents, possibly including dancing and social activities. It was also thought to have once been a customs house. Until Mitre House was built it was the local JobCentre.

LUDUS Dance, who moved in during the 1980s, currently occupies the upstairs rooms of the building, on a ten year contract signed in 2008. The market was originally established downstairs to host traders whose stalls were destroyed in the fire that brought an end to the original Lancaster Market in 1984.

A small cafe - currently closed - nestles in the back of the Rooms.

The Council claims that in working to establish the council’s market offer in the district and looking at how to increase the number of visitors "it has become evident that despite improvements being made to the Assembly Rooms market earlier this year, the market continues to experience a high turnover of traders."

In its press release, the Council singularly fails to mention it had to make refurbishments back in March as a matter largely of public safety rather than for marketing reasons.

In a statement in reponse to the original version of this story they told virtual-lancaster:

"The council did undertake refurbishment works in March to repair the ceiling of the building but at the same time decided to make some aesthetic improvements including repainting the interior of the ground floor of the building which significantly improved the appearance of it for the benefit of traders and customers as well as significantly adding to the cost of the works."

Various options for the future of the lower floor will be discussed by the Council's Cabinet  – but it's clear that council officers feel that maintaining the venue as a Collectors' Market is not viable.

At this stage, Cabinet is being asked to consider the development of a business case for a possible alternative trading use for the ground floor of the Assembly Rooms as a tea room/food emporium. If approval is given and once a business case is developed, a further report will be brought back to Cabinet for a final decision to be made.

The tea room proposal is inspired by similar ventures such as Betty's Tea Rooms in Harrogate, Davenport Tea Rooms in Northwich and, closer to home, Honeywells Farm Shop at Barton Grange.

The proposal - based on a favourable response to the idea from just 29 people of 82 surveyed in a report by marketing consultancy firm Cairn, costing £2000 - comes as the Council also considers the future of its cafe in Williamson Park, and is the most detailed proposal in the report, despite the large number of tea rooms already in business in Lancaster.

The Council says the report, which was conducted outside term time and includes responses from just eight students, was compiled using money from within a budget allocated to reviewing and improving the council’s markets.

Expert help was used to review what people think and know about the Assembly Room at present, and how they might like to see it used in the future – but only 82 people (the minimum requirement, we're told, for a 'reperesentative sample') responded to the survey and a spokesperson for First Age Comics alone told us that despite the venue's low footfall, it had more customers than the 29 who had backed the tea room idea proposed.

“The Council recognises the value of its markets," claimed Mark Davies, Chief Officer (Environment), perhaps forgetting Lancaster's own market has been closed for over a year with no sign of any new tennants. "This year £50,000 was set aside this year to help make improvements.

"In addition in this year a significant amount of money has been spent on improving the interior of the Assembly Rooms," he claimed, although as we note above much of that was necessary repair work to make the building safe for public use.

"The council has also devoted much time and effort to help attract visitors via various campaigns publicised in the local media and on the website," claims Mr Davies. "Unfortunately this had little impact in terms of turnover of stalls or visitor numbers at the Assembly Rooms."

Existing traders are understandably concerned by the proposed change of use, and Mark Braithwaite, owner of First Age Comics, will be making a presentation to the Cabinet meeting to argue the case for retaining or enhancing the existing "Collectors Market" provision.

"Personally, I contest the findings of the report strongly, said Mark. "They claim the businesses in the Assembly Rooms are in decline and that footfall is down, and yet we've experienced growth year on year.

"There are problems with the building but those are, largely, down to the fact that it hasn't been operated as professionally as it deserves to be. The Council could have actively pursued start up businesses and forged connections with Business Link, the Prince's Trust and Lancaster University Business School. Despite us suggesting this, year on year, they've never actually gone through with it."

Lynn, who owns the BBE Babette clothes stall told virtual-lancaster: "I've been here for about 20 years and I feel there is a future for the Assembly Rooms as a Collectors' Market to house not only vintage clothes but for antiques, collectables, comics and crafts. That has always been the view of the people that shop here."

virtual-lancaster also asked one local coffee shop for their opinion on the opening of a Tea Rooms, and was told the building's location "on the wrong side of the one way system" had to be considered. They pointed out the current problems the existing and previous cafe owners have had attracting customers.

“The Assembly Rooms is a historically important building and if it can be used better," argues Mr Davies. "It is only right that we discuss whether or not we should further explore other options for the future use of the building which might prove more attractive to both local people and visitors to the district.”

Until any decision is made to change the use of the ground floor of the building, the Assembly Rooms Market will remain open for business.

A tea room? But hang on - Crows restaurant / cafe next door has just closed up (it's now just a hotel) and Pau Pau, up the road on King Street (on the 'right' side of the one way system) failed dismally, too. Do we really need another cafe, even a posh one? And do we need one run by the Council, especially when it seems it might be considering closing the one in Williamson Park - surely a business that should be raking it in?

(The proverb involving a brewery is spring to mind here).

Surely all the Assembly Rooms needs is a couple of people prepared to run their stall every day (and not leave them unmanned) to break even?

How much are they paying in rent, anyway? I bet it would be a great place for start ups like your article suggests.

Anthony's cafe too. The market building standing empty is killing trade all along there.

The Old Bell is doing Ok in Bashful Alley - it is MUCH handier for the shops, and the Market car park.

People go to the Assembly Rooms for stuff they can't get in town. Vintage clothes, collectors items, antiques, special and interesting gifts. I bought a superb carved screen there not long ago, for a bargain price, picture sized. It looks fantastic. I feel inspired every time I pass it. A mere £20. That's what makes it worth crossing the road for.

Lancaster shopping centre already suffers from an excess of cloned, soulless retail and coffee shops. Why on earth would you want to get rid of some retailers who actually give the town some character and a reason to visit? Another tea room, especially in such an inappropriate location, would be futile if there were no shops to give the centre some soul to attract visitors. Rather than wasting money on barely statistically relevant surveys, the council should support the local traders.

"lancaster - Pop in for a coffee"

It's all we have!

Lancaster doesn't need another tea room or coffee house. We're the caffeine capital of the north by now, surely?

If the Council are looking for savings, then I can suggest over £61,857 in savings (based on the published salaries of senior council officers right now. In today's Lancaster Guardian, Mark Davies is suggesting the current stall holders can all move to the Festival Market in Morecambe. What about the stall's customers who live in Lancaster? Give me strength.

And if the Council is losing funding, why on earth should it even be considering spending more money on a tea room when so many cafes have closed in recent years?

It's incredible to think how badly we have been serviced by several council officers, who brought about the closure of the market (a building now gutted and empty - what happened to Primark?)

I'm not a supporter of the current government but they have done some things that could help the Council generate income rather than cutting it, but officers don't seem interested in those.