Countdown begins to Light Up Lancaster 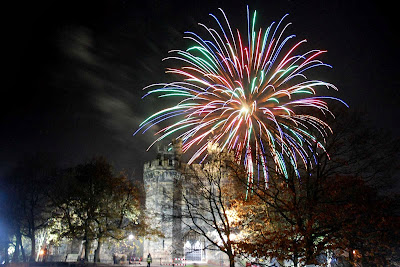 Lancaster’s skies and streets are set to light up with fireworks and an animated arts event like no other.

The four day Light Up Lancaster festival will feature Light Up The Streets on 1st November 1 – and culminate with the city’s fireworks spectacular, Light Up The Skies on 2nd  November.

Light Up The Streets, brought to the city by Lancaster Arts Partners, will animate the city’s beautiful buildings and squares with music, dance, theatre and digital wizardry. This free event, which can be started at any of the various city centre locations, takes place from 6pm-9.15pm.

Among the highlights will be large-scale moving projections in Lancaster Castle Courtyard; the Tower of Salvation in Dalton Square; a musical exploration of the city’s history by young people in Sun Square; a dynamic dance performance with light installations in Market Square and a unique illuminated display of 40 new poems in Lancaster Library.

Information on all the events will be relayed on television screens in shop windows throughout the city centre or Light Up The Streets guides will be available from the stewards. 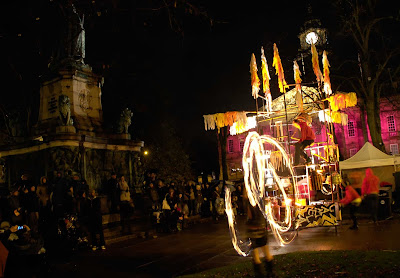 Lancaster city centre is also the place to be on 2nd November for a range of family friendly events in the run-up to Light Up The Skies, the free annual fireworks spectacular organised by Lancaster City Council.

Fireworks will be launched from the top of Lancaster Castle at 8.00pm and a wristband system will be in place again this year for the two official viewing areas at Quay Meadow and Giant Axe. The deadline for registration for access into these two major viewing areas has now passed and wristbands are being distributed.

Both sites will include refreshments and entertainment and BBC Radio Lancashire will be broadcasting live from Quay Meadow from 7pm with a special programme of co-ordinated music on 104.5FM.

Giant Axe will include fundraising activities in aid of St John's Hospice, Lancaster which many local people will wish to support.

Although the fireworks will be visible from almost anywhere in the city that can see the castle and the accompanying music heard by tuning in to Radio Lancashire, there are three additional official viewing areas which do not require passes.

The Council is reminding onlookers that alcohol and fireworks (including sparklers) cannot be brought to the five official viewing areas.

As in previous years, the castle and priory precinct will be closed during the display.

Free parking is available at the Marketgate Car Park for the Friday and Saturday evening events from 6pm to 9pm.

For the full Light Up Lancaster experience, the Lune Aqueduct is the place to be on the evenings of 29th and 30th October for the festival’s launch event which is now fully booked.

Light Up The Waterways will see aerial artists, wandering magicians, dancers, musicians and stiltwalkers perform against the backdrop of the 18th century Grade 1 listed landmark three times each night at 7.15pm, 8pm and 8.45pm.

The event should be accessed from the city centre via the riverside cycle and pathway where the audience will be met by stewards and issued with tickets.

If you would like to be a volunteer steward for any of the Light Up Lancaster festival events, email jtwyman@dukes-lancaster.org. Training will be given but previous experience of stewarding and/or a friendly, sensible attitude is sought.

• Light Up Lancaster programmes are available online at www.lancaster.gov.uk/lightuplancaster or from Lancaster and Morecambe Visitor Information Centres and town halls