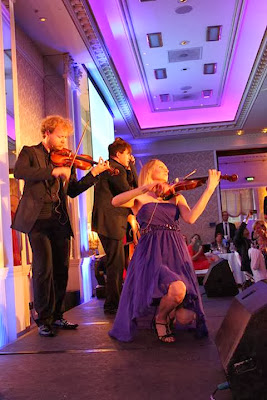 The event will be a classical concert, a gypsy-folk romp, an opera, a stand-up comedy set and a brilliant dance show all rolled into one. From Beethoven to Bluegrass, Offenbach to Elvis, Strauss to Saturday Night Fever, the group deliver uplifting performances across a variety of musical styles all tied together with cheeky audience interaction.

In hot demand in top theatres, festivals and at prestigious venues across the globe, as well as headlining on the world’s most luxurious cruise ships, the band also performs regularly on national TV and radio. Most recently, Graffiti Classics performed on BBC TV’s Hoopla!, played live on Jeni Barnett’s BBC Radio Show as well as being a profile feature on Lyric FM’s Culture File in Ireland. The band has also performed on The Late Late Show in Ireland.

This world-class, world travelled show never fails to get audiences laughing, clapping and singing along.