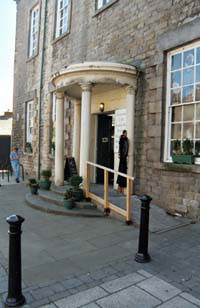 As part of the Council's in-depth look at its costs as government spending cuts hit what it can afford hard, the future of the trading area in Lancaster’s historic Assembly Rooms was discussed by the city council’s Cabinet on Tuesday 5th November, with plans on the table to turn it into a tea room and ditch its unique "Collectors' Market" identity.

The ground floor of this 18th Century Grade 2 listed building on King Street in Lancaster currently acts as a market trading hall selling what the Council describes as an "eclectic" mix of items and the Council commissioned a consultation to consider alternative uses – including a tea room, despite the uncertain future of similar Council-run operations in Williamson Park.

While Assembly Rooms traders  were dismayed by the plan – and some enraged by a further suggestion from council officer Mark Davies that they could all move to Morecambe's Festival Market in the Lancaster Guardian – locals reacted with bemusement to the tea room proposal, pointing not only to the large number of cafes in Lancaster already, but also to the failure of commercial operations such as Pau Pau in recent months.

"Lancaster doesn't need another tea room or coffee house," noted lancasterhour on Twitter. " We're the caffeine capital of the north by now, surely?"

First Age Comics owner Mark Braithwaite – one of the Assembly Room longstanding traders – gave a presentation to Cabinet at the meeting, pointing to his increased customer base presentation and arguing that with better management the existing Collector's Market could not only raise its profile but generate more revenue.

After discussion, Cabinet voted to pursue alternative ideas for the Assembly Rooms' future but the option now includes looking at keeping the Collectors' Market as well – whereas, previously, it was not an option.

The tea rooms and food market are still on the table but they will now be considered with the Collectors Market alongside.

Cabinet will also be meeting with the business owners to discuss ideas for the Collectors' Market at a future date.

The decision still leaves the future of the Assembly Rooms - a Collectors' Market since traders moved there after the disastrous fire that destroyed the original Lancaster Market in 1984 – uncertain, but at least the Council are now considering keeping it as is – with, hopefully, better management.

"We are exercising caution at the moment and will be staying prepared whilst re-examining our back-up plans," says Mark.

Cabinet would spend its time better if it put some elbow into getting the Market Building re-occupied and doing its job as an anchor for trade at that end of town.

It is completely bass-ackward to be investing time into planning projects that cannot succeed as long as the market building presents a barrier to footfall.

The assembly rooms receive little or no promotion. A couple of signs around town, or at least on market days could make a difference, especially in the run up to christmas.

To put in a tea room or fit the place out as a foodstore would need a hefty outlay, (disabled toilets, for example) as well as putting all the current traders out of business.

If the plan is to manage it like the Pavilion Cafe (with staff randomly bumbling around each other instead of an organised crew)the building will be boarded up within two months.

The Assembly Rooms have managed to last for for such along time witout the help of any of the City Councils. So why now should they have to step in and ruin peolples live and lively-hoods, just because the (Government can't do their job right).