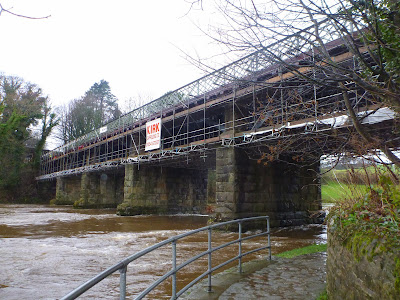 The east pedestrian and cycleway bridge at the Crook O' Lune will reopen tomorrow (Friday 20th December) after a restoration costing around £1million was completed by Lancashire County Council.

Extensive work on the listed structure began in March to replace the timber deck, repoint masonry and repaint ironwork after an inspection had unearthed problems with the timber beams supporting the deck.

The bridge, near the Crook O' Lune picnic site, links Caton with the River Lune Millennium Park. The area attracts 250,000 visitors a year and is popular among cyclists, walkers and horse riders.

More improvements are to be made nearby in January with the creation of a landscaped picnic area alongside the river beneath the bridge. Native trees such as oak and wild cherry will be planted, along with hawthorn and holly hedgerows and wildflowers. Benches in the style of railway sleepers will also be installed, as well as wooden sculptures of the otters which inhabit the Lune.

County Councillor Marcus Johnstone, cabinet member for environment, planning, and cultural services, said: "I'm sure that regular visitors, as well as the thousands of people who come each year from further afield, will appreciate the high quality and sympathetic restoration to this historic bridge.

"The Crook O' Lune is a beautiful part of Lancashire - the county council's major investment to improve the bridge and surrounds will support local tourism and ensure future generations will be able to enjoy the area.

"We're sorry for the inconvenience while the bridge has been closed, and thank people for their patience, but hope they'll agree that the result has been worth it."

Work was delayed for a number of weeks during the summer when nesting birds were discovered beneath the bridge deck. The blue tit and jackdaw chicks were given time to mature and fly the nest before progress resumed.

Traffic management will be removed from the Caton Lune Bridge on Low Road, which has been in place to allow pedestrians to cross alongside traffic while the pedestrian bridge was closed. Workers will return in January to remove scaffolding and the site compound.

The restoration was carried out by Rochdale-based contractor Casey.
Posted by John Freeman at 12:59