The Great Northern Gas Gala holding out at Barton Moss 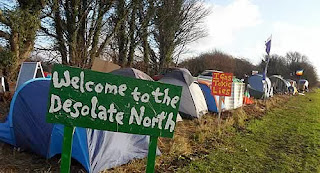 The Northern Gas Gala is the name given to the anti-fracking protest camp outside the new IGas drilling exploration plant at Barton Moss, near the M62 at Salford. The Camp campaign group is asking for donations to help cover campaign expenses and maximise the reach of the campaign.
Please visit http://northerngasgala.org.uk/donations/ to donate or see account details below.

Fracking has triggered fierce opposition from local communities but today George Osborne has approved a new scheme offering fracking companies £100,000 for each exploration well and up to £10million over the lifetime of a project.

IGas originally told the BBC in mid-November that its target was to find coal-bed methane, but campaigners expected the process to lead to the discovery of shale gas and future fracking to extract it. The British Geological Survey estimates that the region may hold up to 1,300 trillion cubic feet of shale gas.

More recently IGas have confirmed to the Manchester Evening News that they plan to drill more fracking test wells in Greater Manchester over the next year, and will also be looking for shale gas in other parts of the region.The firm already extracts gas through fracking at its Doe Green site near Warrington and says the process does not risk harming the environment, which would make the site quite unique, as the process involves injecting the earth at pressure with millions of gallons of an intensely toxic chemical mix.

Frack Free Manchester, a campaign group largely made up of residents of Greater Manchester and Salford, have set up a Community Protection Camp outside the site since test drilling was initiated in the last week of November. However an army of police has been drafted in to protect the fracking company's operations from the residents it threatens. Police handling of protesters in the North appears to be rougher than at the Balham blockade, with injuries being reported from the outset.

Campaigners were alerted to the fact that a convoy of drilling and heavy plant vehicles were due to arrrive to activate the site when large numbers of Police Tactical Aid Units were seen massing at Reds Stadium Salford preparatory to acting as their escort.

Barbara Keeley, MP for Worsley and Eccles South, expressed concerns to the BBC saying that there were 150 officers at the site instead of "patrolling in our local communities".

In response the Greater Manchester Police stated "These officers are drawn from across the force including specialist departments.  We will continually keep staffing numbers under review to ensure a sensible but safe number of officers involved in the operation."

The company says that it cannot proceed to fracking without additional planning consent from the local authority. However with executives of the major UK fracking companies embedded in the current government, arranging tax breaks for fracking companies and the taxpayer also funding their private army of police to remove opposition, IGas are confident enough that licencing is in hand to risk a substantial investment in their current exploration and testing on Manchester's doorstep.