Frontierland fun and music comes to the Nuffield Theatre, courtesy of More Music 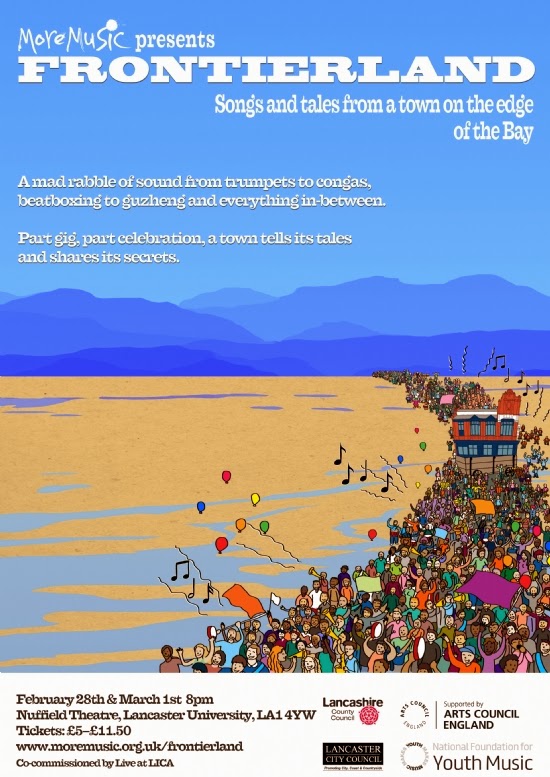 Frontierland - the name inspired by Morecambe's former western-themed attraction - offers a lively, raucous, fun-time band on the street. Horns and drums will play original tunes mixed with popular melodies and ‘Bring Me Sunshine’.

Dancers waving massive coloured flags illustrating the landscape of Morecambe Bay will surround the band - the musical circus is coming to town.

Frontierland is produced by More Music, and co-commissioned by Live at LICA. The show is billed as ‘ Songs and tales from the edge’, representing the community’s diversity in a mini festival with a grand finale including:


More Music is a community music and education charity based at the Hothouse in the West End of Morecambe. The organisation delivers workshops training, performances and festivals both in the UK and abroad.

“There are a number of journeys and threads in the show that develop throughout the evening," Pete Moser expalins, "and a sense of respect for humanity, of community joining together, of political justice and equality are mirrored by the score. The finale builds up to the orchestra and chorus telling the story of people working in the bay with aspirations for the future.

"The overall performance is a circus of music with its magical tricks and wonderful performers. Week by week we have been building up to this show - bringing together musicians and imagining the sounds we can make together.

"This is our community and we are now so excited to share the great music we can make with an audience. Come and join the party!”

• Frontierland, Songs and tales from a town on the edge of the Bay, 8.00pm Friday 28th February 28th and Saturday 1st March 2014.For more information, visit the website at www.moremusic.org.uk/frontierland email Sandra.wood@moremusic.org.uk or call 01524 831 997.
Posted by John Freeman at 06:53