Like followers of sport, music lovers know that what matters is not what you do but how you do it. Sport and music are both art forms. Both promote self-expression, either individually or in a team. An audience can participate vicariously in both experiences. The parallels go on and on.

It would not therefore have surprised this reviewer if the responses to an exit poll, had there been one outside the Great Hall last Thursday evening, had mirrored those at any sports match. In particular, in reply to the fundamental question ‘What brought you out tonight to this event?’, lovers of both music and sport must surely declare ‘I wanted to experience for myself the skills of these talented players.’

It is a rare and precious opportunity to hear, as we did, music written for piano trio. Without the right combination of instruments, the music is just so many dots on the page. Yet the very rarity of piano trios means that music composed for that combination tends to be less-well known and therefore may be less attractive to audiences. 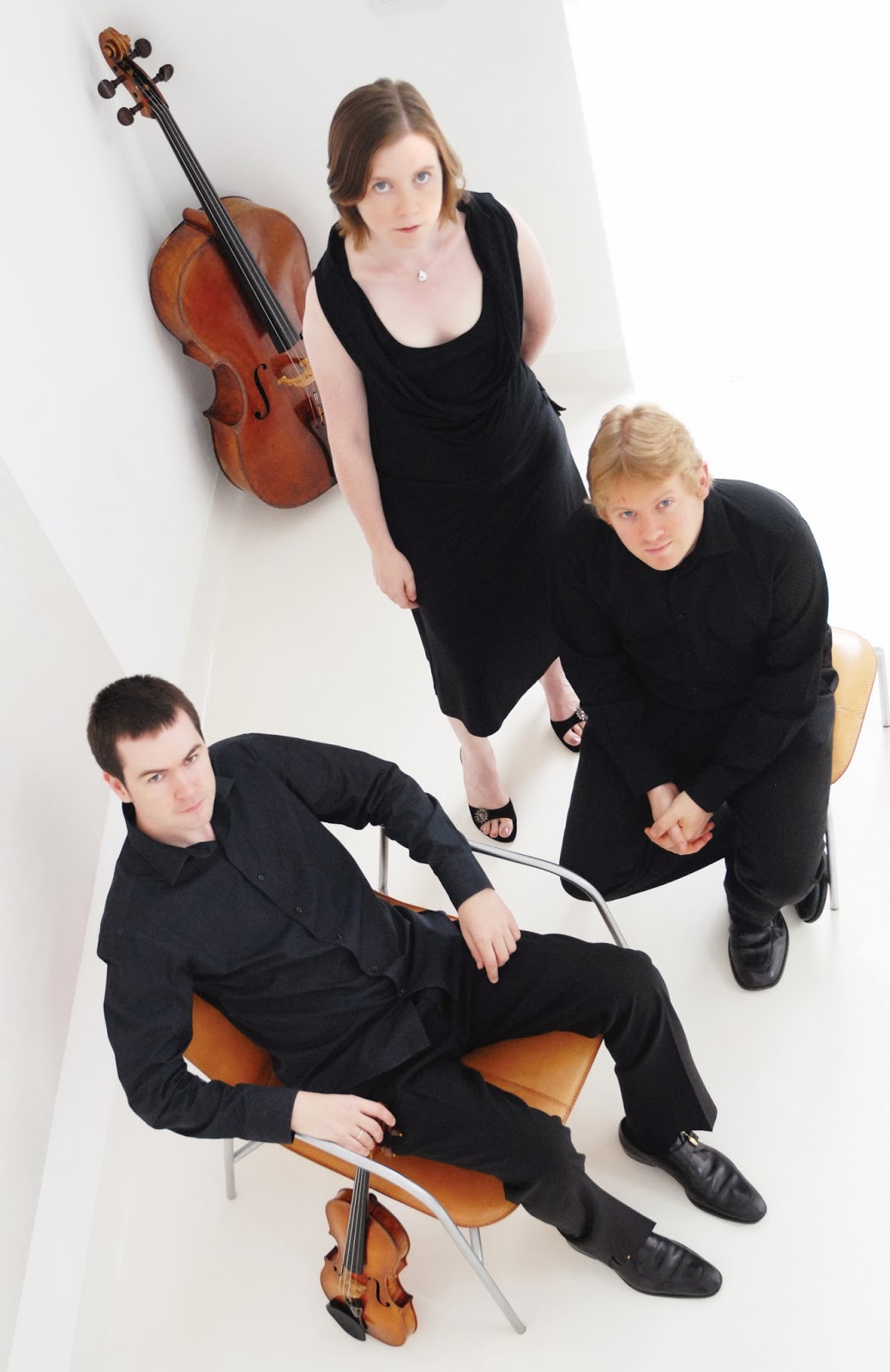 Having resisted any urge to avoid the artistic unknown, those who attended the Fidelio Trio concert were rewarded with a generous helping of ‘join us as we make music’. They were also invited to learn something about each piece in the programme.

‘The Chronophage’ was described, appropriately, by its composer Tom Coult in person. The work explores not so much mixed rhythms as mixed pulses. It was inspired by the Corpus Clock in Cambridge, a mechanism which gives the exactly right time only every 5 minutes. Analogous then to the harmonic device of dissonance resolving into consonance, randomly (I think) out-of-step beats are periodically brought back into synchronisation.

The truth is, however, that words cannot adequately describe sounds. Although we were told that Fitkin’s ‘Lens’ was subdued in comparison to some of his other pieces, it was the 6-note broken chord, the high strings with little or no vibrato and the driving piano chords that came later which finally caught my attention.

What one really needs is to be shown what to listen for. An ‘action pre-play camera’ where the audience is invited to sample in advance the sounds that are to come.

Sports presentation techniques may have much to offer to concert goers. How wonderful would it be, for example, to have an expert sitting nearby drawing one’s attention to all the subtleties that would otherwise escape notice! Illustrative lines being drawn between interacting players, as is done with pairs of strikers and back-four defensive lines. Action replays from different angles to allow one to have a second chance to experience not only what has happened but to discover, and to savour, how it happened. Enjoying music could be so much more involved than just listening.

I would certainly have benefited from an action pre-play of the opening Schumann trio and would have loved to have been able to hit a re-play button in sections of the marvellous Ravel with which the concert concluded!

Thursday’s audience was extremely attentive and well-versed in concert etiquette. But it did not fill the hall. Possibly this season’s rich programme of musical events has caused emotional burnout among the faithful--or a cash crisis (with three promising events yet to come).

But suppose that regulars confessed to staying away because there was no promise this time of a tune that everyone knew? Would a promise of an even more audience-interactive approach help to fill those empty seats?