Review: Retorica at Live at LICA

Retorica at Live at LICA
Thursday, 6 March 2014
in the Great Hall, Lancaster University

Harriet Mackenzie and Philippa Mo met at the Royal College of Music and have been persuading audiences artfully since 2010. Each has a list of other musical collaborations as long as your arm but it is as Retorica (Italian: artful persuasion) that they bring the lesser-known repertoire for two violins to concert platforms around the world. Last Thursday, they brought their unique experience to the Great Hall at Lancaster University.

The programme looked great even before the doors opened but the layout of the Hall further raised expectations of an exciting evening to come. Set out in three-quarter round in the middle of this building’s very large space was a low platform with four tall music stands tightly clustered in its centre. It became clear that the two players would stand facing one another and that each would need two music stands to accommodate all the paper necessary to avoid awkward page turns.

Throughout the concert, the two elegantly-dressed young players took it in turn to introduce the pieces, occasionally swapping places on the platform, solely for reason of variety, it seemed. I thoroughly enjoyed the opening Telemann piece, which had been written specifically for two violins. It was a masterpiece of polyphony and demonstrated that the talented composer needs only two instruments and a thorough understanding of Baroque compositional devices to create fantastic music.

Like his grandfather before him, Gabriel Prokofiev had sought to bring new sounds to the violin duo repertoire. He said that he wanted to explore the more intimate and ‘duskier’ regions of the violin. He had also introduced challenging harmonics in both players’ parts and had to confess that the ink on the parts for the middle movement was still a little damp.

Both Prokofiev sonatas (S’s and G’s) were a huge pleasure to hear, different though they were to one another. As was said in its introduction, the first sonata was full of dialogue and conflict and swimming with colours and new sounds. The two parts mostly stuck to their allotted registers but otherwise contributed equally to the music’s creativity. Prokofiev the younger’s sonata also contained new colours and sounds but substituted quiet conversation for loud argument: less shouting and more just holding hands, as it were. 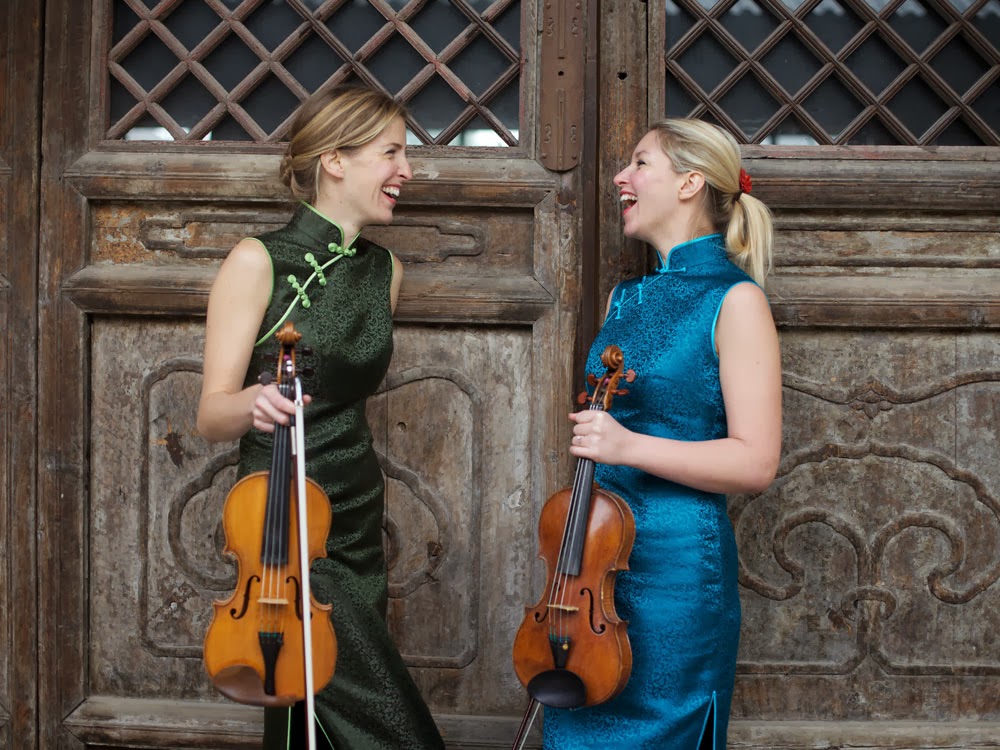 The Bach two-part inventions and the Wieniawski etude were wonderful illustrations of ‘proper’ art which is also specifically designed to teach some particular artistic device or to explore a particular genre. The Bach pieces promoted the independence of two hands on a keyboard whereas the Wieniawski work concentrated on the trill ornament. The skill of the composers was such that the listener did not need to know any of that to fully enjoy either piece.

The evening was not without two small dramas. The first came moments before the commencement of the first piece after the interval. There was a hesitation followed by one player’s confession that she had forgotten to bring her mute. The other player gallantly filled the gap with additional observations and information about the music until her colleague returned to the platform.

The other incident related to the intermittent drone of a fan motor somewhere in the building. Horribly, the fan switched on during the final pianissimo unison of the first Bach Invention. Happily, its hum joined in almost exactly on pitch!

For an encore, the duo played one of the Bach pieces again. Nice, but I wished there had been a way of putting the whole evening’s experience into a bag to take home. Why must good things always come to an end!

Curiously, someone found a violin mute in the second row seating immediately following the concert.